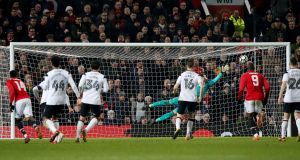 Manchester United seemed destined for an unwanted replay before Jesse Lingard again took responsibility, scoring an 11th goal of the season with six minutes remaining, prompting Romelu Lukaku to seal the win at the end of normal time.

José Mourinho’s side had seemed unable to kill off Derby County, as towards the close Marcus Rashford crashed the ball off the right post, Lukaku’s header hit the left, and Paul Pogba missed a sitter. Yet Lingard’s swerving long-range shot showed them how to do it and so United move on content.

United made a crisp start. Luke Shaw and Pogba moved the ball along the left. The Frenchman beat a Derby defender and switched possession to Lingard, who should have scored, instead lifting the shot high over Scott Carson’s goal.

Next up Ander Herrera rose well but his header was similarly misdirected.

Then Mkhitaryan spotted Victor Lindelof galloping down the right. The Swede collected in his stride and arrowed the ball right across the six-yard box where Rashford might have ran. Derby were being given no chance to settle as now Pogba took aim with his left foot, this effort having to be watched carefully by Carson.

Yet following this flurry of chances the visitors did get on the ball and stroke it around a little. Lawrence, the No10 in Rowett’s 4-2-3-1, broke up the middle of United and reversed play to Winnall but the centre-forward was stymied. This combination appeared one that could concern Mourinho’s team as, when Lawrence again drove at them moments later, Winnall made a run and Smalling’s interception was timely.

The contest had an attractive flow. Lingard and Mkhitaryan put Rashford in and after a trick to create space the striker missed a glaring chance to open the scoring. Mata’s free-kick was saved well by Carson to his right and from the ensuing corner United found themselves back-pedalling. Mkhitaryan took this short and suddenly Shaw was passing back towards the centre-circle.

When the ball found its way to Johnny Russell he coasted down the left and found Martin Olsson’s head, the left-back forcing Romero to tip over the bar. As the half-hour approached United became sloppy. Mkhitaryan gifted possession to Derby, Winnall raced forward and the Armenian was fortunate to see the attack fizzle out.

The same was true of United’s initial momentum: their display had flattened and they were now vulnerable. The lack of ruthlessness that Mourinho can bemoan was evident when a Rashford glancing header from Mkhitaryan’s ball hit Carson’s left post. The No19 was at close range so had no excuse for missing. It was a repeat story when Mata picked him out and he could only head straight at the keeper.

As the interval neared United kept pressing. A Pogba free-kick drew “oohs” from the home support as Carson saved sharply to his right. Yet at the break the tie remained deadlocked.

Mourinho believed a change was required so Lukaku, who missed the win at Everton due to a head injury, replaced Mkhitaryan for the second half. The Belgian took his customary No9 berth, Rashford moved left and Lingard went in behind Lukaku.

Derby, though, made the brighter start. A Tom Lawrence free-kick from the right found Tom Huddlestone who was unlucky not to score with a shot. From here United mounted a first attack of the period. Pogba and Lukaku combined and when the latter lost the ball he quickly claimed it back. Up stepped Herrera whose attempt was deflected for a corner.

This enlivened United. Pogba dug out a route into Derby’s area and when the ball arrived at Mata’s feet he pulled the trigger and Carson beat the ball away. The passage reflected United’s dominance at the start of the contest.

A Rashford corner from the left found Lukaku’s head but he could not direct it and the same player’s cross moment later was missed completely by Mata’s head.

All of this illustrated a troubling lack of requisite quality in front of goal and when Lawrence fired at Romero and he dived to his right this was as accomplished as anything United had produced.

Old Trafford did, at least, raise the volume, which does not always occur here. United quickened the tempo yet a hint of desperation remained. Pogba set off on a run that was halted easily by Derby and Mourinho made a second substitution, bringing on Anthony Martial for Mata.

Rowett brought on Matej Vydra for Winnall and Derby’s manager may have seen a credible replay move into sight. But, in the end, it did not prove so. – Guardian service

Longford football team of 1968 still deserve special mention 07:00
Niall Quinn and Brian Kerr differ on role of outsiders in FAI 06:00
New team, fresh start, has Dan Martin shooting for the stages 06:00
Sporting Cathedrals: Cheltenham reveals all about the wonder of racing 06:00
Fathers, sons and soccer: Reflections on the family business 06:00