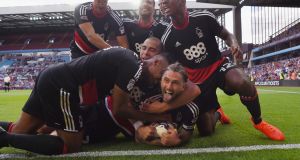 The midfielder scored with just three minutes left as the visitors escaped with a 2-2 draw despite finishing the game with 10 men following a thrilling second half.

Two goals in two second-half minutes put Villa ahead after Ross McCormack and Rudy Gestede turned the game on its head.

They cancelled out Apostolos Vellios’ first Forest goal while the visitors had Hildeberto Pereira sent off for his second yellow card following the celebrations for Lansbury’s goal.

Villa dominated for long spells but again came up short after previously blowing a home lead against Huddersfield as McCormack hit the post, Jordan Ayew crashed the crossbar and Jonathan Kodjia was denied a debut goal.

Roberto Di Matteo’s now side have just six points from their first six games following relegation from the Premier League as they stutter in the Sky Bet Championship.

Vladimir Stojkovic was Forest’s hero in the first half but there was little to trouble the debutant keeper early on.

Villa were guilty of trying to score the perfect goal in the opening 10 minutes as they dominated possession but the visitors rode out any early pressure and the game lulled.

With little atmosphere Forest were comfortable to keep the tempo down and the only flashpoint in the opening half an hour was when Pierluigi Gollini needed treatment after being clattered by Lansbury.

But Villa should have gone ahead after 33 minutes when they opened Forest up for the first time as their £27million strikeforce combined.

Ayew wriggled free on the edge of the area to find £15million debutant Kodjia and the ex-Bristol City striker found McCormack at the far post, only for the £12million buy from Fulham to hit the post from two yards.

A minute later Ayew diverted Aly Cissokho’s cross wide and shot over just before the break as Villa went in search of an elusive first-half breakthrough.

Powderpuff Forest offered no threat and needed Stojkovic to keep them level at half-time when he clawed Kodjia’s far-post header from the bottom corner.

Gollini failed to recover from his first-half injury and was replaced at the break by Mark Bunn and the former Norwich goalkeeper was beaten after 57 minutes.

Villa had dominated again but Gary Gardner wasted possession on the edge of the Forest box and the visitors broke away.

Lansbury led the charge to find Vellios 25 yards out and the Greece international turned and unleashed a dipping drive which flew past the helpless Bunn.

Villa almost hit back instantly when Ayew crashed a drive against the crossbar and Stojkovic turned Kodjia’s header wide as the hosts began to pile the pressure on.

It was one-way traffic and Stojkovic saved McCormack’s header after 71 minutes before Villa turned the game around in two madcap minutes.

Ayew was the key again as he set up McCormack to level on 72 minutes as the striker steered past Stojkovic from 15 yards.

Then, on 74 minutes, Villa were ahead when Ayew — Forest’s tormentor-in-chief — tricked his way into the area and crossed for substitute Gestede to control and hook in a half volley.

But the hosts then shot themselves in the foot as a breakneck second half continue when Lansbury levelled with three minutes left.

Pereira slalomed into the box to tee up Lansbury and the former Arsenal youngster crashed a brilliant finish into the top corner.

Pereira was then sent off following the celebrations after he collected his second yellow card in just two minutes but Forest survived to claim an unlikely point.