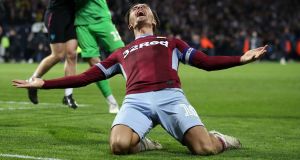 Aston Villa have a shot at redemption. Twelve months on from their play-off final defeat against Fulham, Villa are back at Wembley and 90 minutes from a return to the Premier League after a long, fraught and draining contest ended with Dean Smith’s side triumphing on penalties. Tammy Abraham converted the winning kick against their West Midlands rivals, after Jed Steer had saved two penalties at the start of the shootout.

Earlier in the evening, Craig Dawson’s header, just before the half-hour mark, had levelled things up on aggregate, but the complexion of the game changed after Albion found themselves down to 10 men for the second time in four days, when Chris Brunt, their captain, picked up two yellow cards for fouls on John McGinn. Albion managed to cling on in extra time but Villa prevailed 4-3 on penalties.

History was against Albion – 16 of the last 18 sides to win the first leg of a Championship play-off semi-final have gone on to go through – and the home side also had to contend with the absence of their top scorer. Gayle’s suspension, following a red card in the 2-1 defeat at Villa Park on Saturday, felt like a huge blow. Albion’s supporters were not going to allow it to dampen their spirits, however, and it was quite an atmosphere that they whipped up inside the Hawthorns, creating a wall of noise right from the outset that reverberated around the stadium. The question was whether their players could feed off that energy.

For 25 minutes or so precious little happened. It was tense and niggly, with neither side really imposing themselves or looking like scoring. That was more of a problem for Albion than Villa given the balance of the tie, and it was tempting to wonder whether James Shan would be forced to change his tactics at half-time to get some more support to Jay Rodriguez. Leading the line in a 5-4-1 system, Rodriguez cut an isolated figure and was surrounded by claret and blue shirts whenever he received the ball.

From Villa’s point of view that open period was going exactly to plan. Then, almost from nowhere, came the breakthrough. The visitors cleared a corner – one that Smith felt should never have come about, the Villa manager arguing that Tyrone Mings was fouled by Rodriguez moments earlier – and Mason Holgate hurled another long throw deep into the area. Villa knew what was coming but they were powerless to stop Dawson, who timed his run perfectly, arriving late to meet the ball with a towering header from about eight yards out that he guided towards the far corner and in off the post.

It was a rare moment of goalmouth action in a frantic first half that was high on intensity but low on quality. Villa outnumbered Albion in the middle of the pitch but never really made the most of some promising positions. A decent free-kick opportunity was wasted after Jack Grealish was bundled over by Holgate, and Neil Taylor, afforded so much time and space inside the opposition penalty area, wastefully picked out an Albion shirt. It was that sort of first half.

Smith would have hoped for more from his wide players in particular. A burst of pace from Anwar El Ghazi early in the second half showed what Villa had been missing and ended with Sam Johnstone punching clear an inviting cross. The game had opened up now, with Villa no longer in a position to allow it to drift. Brunt, striding forward, thumped a rising 30-yard shot that flashed over.

Albion were starting to play with more belief and nearly scored a second in farcical circumstances. Steer blindly played a goal-kick out to his right and Jacob Murphy was easily able to intercept. Cutting in from the left, Murphy curled a low right-footed shot that Mings, scampering back towards his own goal, managed to keep out. Another Brunt effort from distance skipped past the far post as Albion continued to threaten.

Back came Villa, Grealish and Conor Hourihane combining to set up El Ghazi for a raking right-footed shot that Johnstone, arms outstretched, beat away. All the while tackles were flying in. Brunt was booked for a full-blooded challenge on McGinn, while at the other end Taylor picked up a yellow card after upending Holgate. The significance of that Brunt caution would soon become clear. Another poor tackle, again on McGinn, prompted an inevitable second yellow card, leaving Albion down to 10 men.

Villa were now cranking up the pressure and only a splendid save from Johnstone denied Albert Adomah a late winner in normal time. In the end though, they would not be denied.

*In the 23rd minute there was a minute’s applause for Jim Lynskey - the 23 year-old West Brom fan who sadly died on Monday morning after complications in a heart condition. Lynskey set up the organ donation campaign group Save9Lives when he was first listed for a heart transplant - www.save9lives.com.