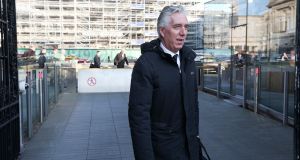 In the absence of former FAI chief executive John Delaney, there will be a great deal of interest in whether his former supporters continue to fight his corner. Photograph: Laura Hutton

Fifa will be in Dublin on Wednesday for talks with the FAI along with, it seems likely, Sport Ireland and the various members of the five-strong governance review group.

But perhaps the more significant meeting of the day will be that of the association’s national council which will gather in Abbotstown for the first time since the organisation was thrown into crisis a couple of months ago.

The 50-odd-strong council, long a key decision-making body before it was systematically undermined, was due to gather last month but the meeting was postponed and so this will be a first opportunity for members to hear what the association’s officers and interim chief executive have to say about all that has gone on.

It will also give those at the top table a chance to gauge just how the membership views the way they have handled things so far.

The agenda for the meeting is understood to be routine enough and so interest will focus on the interim chief executive’s report and ‘any other business’ items. There is normally a finance committee meeting, too, where some sense of the scale of the current crisis might be conveyed.

In the absence of former chief executive John Delaney, and after the various revelations that have served to so badly undermine him, there will be a great deal of interest in whether his former supporters continue to fight his corner.

More significant, though, is how open the council as a whole is to the scale of change proposed for the wider association.

There has been talk of returning some of the council lost power as a way of restoring accountability to an organisation where there has clearly not been enough for a very long time.

Minister for Sport Shane Ross suggested that various stakeholders not currently represented, most obviously players and supporters, should be given additional seats at the table.

Others, though, see the council as having been very much a central part of the problem and point to the need for a professional board largely made up of outsiders.

If the insiders don’t like the sound of that then real reform may prove that much trickier to achieve over the coming months.

It is possible that there will be a move to bring Paul Cooke, unopposed for the position of treasurer, on board now given his financial expertise rather than wait to hold a plebiscite on his candidacy in July.

Fifa, meanwhile, will doubtless have advice to offer on how to handle all the unwanted external attention but it is likely to be interested also in hearing about whether all that is going on will affect the association’s participation in the exploratory stages of a bid for the 2030 World Cup.

A decision on whether the FAI would join forces with the English, Scottish, Welsh and Northern Irish associations was generally expected this year with everyone keen to establish early momentum over possible rivals from around Uefa.

Having the FAI on board would still have its attractions but if Delaney ends up losing his place on the Uefa executive committee then the association would be missed that little bit less.

1 Tianna Bartoletta: ‘After you’ve gotten your medal, you become black in America again’
2 Betting shops face uncertain future as they prepare for Monday reopening
3 Premier League stadiums to be divided into red, amber and green zones
4 Sports bodies must keep electronic records of participants as training sessions resume
5 Sideline Cut: Marcus Rashford proves himself a leading man off the pitch also
Real news has value SUBSCRIBE
Crossword Get access to over 6,000 interactive crosswords