Arteta offers Arsenal a glimpse of a more coherent future 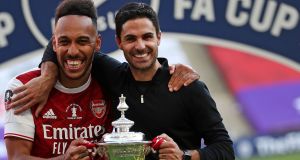 Five minutes before half-time at Wembley Stadium, Mikel Arteta could be seen leaping out of his chalk rectangle and haring off down the touchline, feet battering the turf like an angry marionette, hands carving strange, jagged shapes in the air. Here was a man gripped suddenly with visions of collapse and disaster: planes falling from the skies, locusts across the sun, a tidal wave over the main stand.

In fact the cause of Arteta’s panic was a slight drop in intensity from Ainsley Maitland-Niles, who was wandering a little vaguely on the left wing and failing to pursue, at just the wrong moment, the manager’s plan of attacking the space behind Chelsea’s full-backs.

Maitland-Niles sprinted off into the space Arteta had seen, curving his run to meet a lovely floated pass from Kieran Tierney. And this was the pattern at times in the FA Cup final on Saturday, most notably in the half-hour after Pierre-Emerick Aubameyang had levelled the score at 1-1, as Arsenal boxed Chelsea in, overloaded the flanks and allowed their own highly mobile front three to exploit the tender spots in a slow-turning defence.

It is, of course, easy to get ahead of things at moments such as these, and to forget that trophies are an end in themselves. Arsenal now have a 14th FA Cup to cheer. Arteta has a tangible success to sharpen the impression of a manager of real transformative energies.

And as the final whistle blew it was unexpectedly touching to hear the unconfined shouts and shrieks of the players echoing around the empty stadium. Rob Holding in particular seemed overcome at winning the grand old founding trophy. For Aubameyang this is a domestic trophy on a par with any in his storied career.

Still, though, this being football, it is always necessary to look at the next thing; to extrapolate and speculate, and gauge the ultimate ceiling of this spike of progress. With this in mind it is those periods of smothering, fluent team-play that will occupy Arteta’s thoughts this summer.

Victory on Saturday completes a run of 13 wins in 19 games, including an FA Cup win and a pass to Europe next year. In the last two and a half weeks this cut-and-shut team have beaten Liverpool, Manchester City and Chelsea. There is a sense of slack being taken up, of knots being smoothed. Something is happening here. But what?

This was also another win against the head. Chelsea arrived at Wembley as the more settled squad. But Arsenal came with aces of their own, too. If Arteta has shown one outstanding quality, it is the ability to organise his team for one-off games against high-class opponents, to instil an intensity and attention to detail that has for many years been a defining Arsenal absence.

There will be some unease at the nature of that progress, if only because victory at Wembley owed much to two players the club have to work to keep this summer.

Aubameyang was a constant, gliding source of menace. He now has 70 Arsenal goals in 109 matches and seems, if anything, to be getting better. The wonky chain of logic that led to Mesut Özil’s contract of death – the idea that this is a player you just can’t afford to lose – actually does apply now. Get Aubameyang to stay and he can blaze a trail at the front of this evolving team.

Behind him Dani Ceballos had an intriguing game: a semi-interested spectator for the first 20 minutes; an assertive, quietly dominant presence for the rest. Arsenal must hope Ceballos will consider extending his loan period from Real Madrid. There is the heart and the cutting edge of an evolving team here. Ceballos and Aubameyang are vital to the project, if not quite the end of the project themselves.

Wembley felt like a place of unresolved questions at kick-off, in an FA Cup final that will surely stand as the most eerily zombified of all these ghost-ship events. From a kind of corrugated raft somewhere high on the vast Wembley roof, a spot without any obvious support or means of access, the pre-recorded voice of Emeli Sandé was heard singing Abide With Me. Hopefully she took a stash of oatcakes and a bottle of whiskey up with her.

The players kicked off in a polite hush. And in the fifth minute the Arsenal defence set about repelling Chelsea’s first attack with all the steely resilience of a collapsed meringue. There was a nice pass from Mason Mount and a lovely, super-fast switch of feet from Christian Pulisic. But this was a case of dribbling around the wheelie bins.

Chelsea dominated those 21 minutes, pressing high, stealing the ball, and zipping their combinations about at speed. Given what happened next the only sensible conclusion is that Ceballos must have been extremely thirsty, because after the drinks break he was transformed.

He is a fascinating player, a midfielder who trudges rather than runs, moving with all the sprightly ease of an escaped con in ankle-manacles making good his escape across a turnip swamp. But Ceballos is also a high-class midfielder, and at Wembley he manoeuvred the ball with purpose, blocking off Chelsea’s angles, and curating the wave of pressure either side of the equalising goal.

In reality the change came from Arteta, who seems to have used the break to urge his players to target the gaps left by Reece James pushing high; and by the lack of pace among the ageing Spanish contingent in Chelsea’s defence. Nicholas Pépé was once again dynamic and purposeful. Maitland-Niles worried away at James, allowing Aubameyang to float in on that side.

Pépé smashed a wonderful shot into the top corner, only for offside to intervene. And moments later Aubameyang was pulled down by César Azpilicueta, who doesn’t have the gas in his legs for this foot race, so resorted instead to the power of arms. Aubameyang put the kick in the corner, a twitch of the hips sending Willy Caballero the wrong way.

The winning goal stemmed from Ceballos doing something brilliantly ugly-clever, turning his back on Pedro to block him off and allowing the ball to run on into the path of Héctor Bellerín. He made a fine run forward. Pépé fed Aubameyang. What happened next was a wonderful miniature. Aubameyang dragged the ball left, leaving Kurt Zouma in a different timeline, before nudging it in a lovely parabola over Caballero and into the far corner, the kind of finish you can come up with when you have one strong foot and another even stronger one

The referee aided Arsenal’s cause. Chelsea lost three important players on the day. But this was an afternoon of significant moments won, and of a glimpse into a more coherent future that Arteta will grasp at hungrily. At the final whistle he ran to hug Bellerín, then veered off to whisper something seductive in Aubameyang’s ear. The task of driving this team on starts right there.