Wright makes the difference for Bohs as they see off Cork 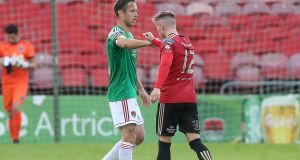 Bohemians moved to within a point of second-placed Dundalk in the SSE Airtricity League Premier Division as Andre Wright’s fourth-minute goal proved to be the winner at Turner’s Cross on Sunday.

While Keith Long’s side couldn’t build on the momentum that Wright’s early goal provided, there was no doubting their superiority over a Cork City side that is now bottom of the top flight after the first round of fixtures since the resumption of football.

Left-winger Danny Grant, whose saved shot led to the chance for Wright to convert, was a constant threat for the visitors on the left flank while captain Keith Buckley and JJ Lunney were solid midfield and a cohesive defensive unit was never truly cut open by the hosts.

The crowd, if there was one, would still have been settling into their seats when the goal came. Grant was allowed to carry the ball in from the left before looping a shot goalwards and, while Mark McNulty palmed it away, Wright was able to get there first to convert the rebound.

Given that City had only scored one goal in the five matches before the start of the Covid-19 pandemic, it was a terrible start and Bohs were able to dictate the flow of the game in the opening quarter. Centre-back Dan Casey - formerly of City, and a scorer for them against Bohs in this fixture in 2019 - went close twice in quick succession, sending a low free kick wide and then seeing a header go off target from a Lunney corner while Dawson Devoy should have done better with a 25-yard shot when Grant found him unmarked.

Bar centre-forward Cian Murphy almost getting on the end of a McNulty goal-kick - denied by Anto Breslin - City didn’t threaten much in the opening half Bohs picked up where they had left off on the resumption.

Wright and Grant went close for them, though City almost snaffled a leveller when Murphy blocked down a Stephen McGuinness clearance only for the ball to loop over the bar.

It would have been against the run of play, however, and Kris Twardek should have made it 2-0 for Bohs from a Devoy free kick while Wright sent an effort narrowly past the post.

Grant and Lunney both found shots saved by McNulty when they should have done more to test him but, while City pressed late on, an equaliser remained elusive. The closest the hosts came was when a low cross by sub Dáire O’Connor was miscued by Deshane Dalling in injury time.

They will travel to Waterford next Saturday seeking a first away win and goal in almost a year, while Bohs host Dundalk on Friday night with a chance to leapfrog the champions.