Only the loanees: Arsenal not in market for permanent signings 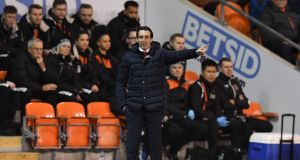 Unai Emery has said Arsenal will be able to sign players only on loan this month. The Arsenal manager, who does not have a problem with Aaron Ramsey agreeing to join Juventus on a free transfer at the end of the season, has been linked with moves for Barcelona’s Denis Suárez and Sevilla’s Éver Banega.

He expressed admiration for Banega in particular before admitting it is unlikely he will be given funds for permanent signings in January.

“We cannot sign permanently,” Emery said. “We can only loan players. I know the club is working on possibilities of which players can help us with big performances like we need now. I cannot say more.”

Emery worked with Banega and Suárez at Sevilla. Suárez, who joined Barcelona from Manchester City in 2013, is out of favour and he would help to solve Arsenal’s lack of attacking width. It remains to be seen whether the club can secure a loan for the 25-year-old. It is thought Barcelona want £10 million (€11 million) for Suárez.

Sevilla are likely to place a hefty price on Banega, who has been a key figure for Emery in the past. “I know this player and he’s a very good player,” the former Sevilla manager said.

Emery respects Ramsey’s decision to join Juventus on a five-year deal worth £36 million. The player’s future has been up in the air since Arsenal withdrew their contract offer this season. Emery’s only demand is that the 27-year-old continues to show commitment.

“I respect his decision a lot,” he said. “I say to him every day we need his performance for us. In the last match I was very happy with him. I asked in the last match at Blackpool if he is okay to help us play and he said: ‘Yes, I want to play’ and he played with a very big behaviour and commitment to us.

“After, his future belongs to him, his family and agent. Every day he’s here with us, he’s working very well. I want his behaviour and his focus to be on West Ham on Saturday.

“I cannot say more about his situation. The most important thing is that Aaron Ramsey is with us. His future I respect a lot because he has a very private decision but I repeat I am very happy with him.”

Arsenal’s defensive problems have eased for their trip to West Ham, with Héctor Bellerín, Konstantinos Mavropanos, Shkodran Mustafi and Nacho Monreal returning to full training. Mesut Özil could also play after shaking off the knee injury that has kept him out since St Stephen’s Day. – Guardian