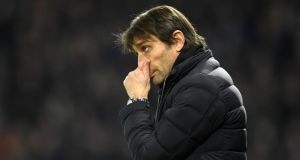 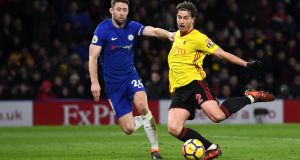 Antonio Conte had shivered through much of this contest, hands planted deep in the pockets of his puffa jacket and that distant, rather haunted look in his eyes which tends to mark out Chelsea managers under the cosh. The Italian had been emotionless as Eden Hazard belted his team level eight minutes from time and, perhaps more significantly, just as motionless as Watford ran riot in what time remained. A third chaotic defeat in four games has reinforced the sense this campaign is veering away from the champions.

They were poor throughout here but, having gleaned improbable parity, would still find time to wilt. Daryl Janmaat’s wonderful exchange with Roberto Pereyra and smart finish across Thibaut Courtois would restore the lead Watford’s dominance merited, and there was still time for the game’s outstanding performer, Gerard Deulofeu, to roll in the hosts’ third and Roberto Pereyra to claim a fourth in stoppage time. As perverse as it seems at a club still in the top four and involved in the Champions League and FA Cup, Conte is witnessing the unravelling of his team’s campaign.

There had been a nervousness to Chelsea from the outset which betrayed just how brittle their confidence had been rendered by recent setbacks, with those jitters exacerbated by events over the opening period.

They had rather grimaced into the contest, undermined by a lack of conviction, a sloppiness in possession and indecision across the backline which had Conte blanching in his technical area while Watford swarmed over his players sensing vulnerability.

By the break they were wheezing in deficit, down to 10 men and fortunate still to be clinging to any hope of parity. In so many ways, their struggles had been personified by the nightmare endured by Tiémoué Bakayoko. As cameos go, his 30 minutes on the pitch plumbed the depths.

Focus will be drawn to the two bookings the £40 million midfielder picked up for clumsy fouls on Etienne Capoue and Richarlison that had him dismissed on the half-hour, but that only told half of the story. His 28 touches had been littered with errors, from a weak header that was picked up by Abdoulaye Doucouré, a former team-mate at Rennes, to misplaced and sloppy passes presented to Deulofeu, Capoue and Richarlison. All four errors led directly to shots at goal. As the Frenchman trudged down the tunnel bravely offering the away support a clap – the chorus bellowed back was far from friendly – after his red, it was tempting to wonder which team benefited more from his departure.

Watford cared little. They had been aggressive and energetic, inspired by Deulofeu’s trickery and deceptive pace on his home debut, and deservedly led. The chances presented them by Bakayoko should have yielded an advantage but, just as Chelsea’s reshaped line-up was contemplating reaching the break unscathed, Daryl Janmaat slid a pass down the right beyond Gary Cahill and Deulofeu had space in which to run at pace.

Thibaut Courtois slid out and made no contact with the ball with the Spaniard, seeking out the contact, sprawling over the goalkeeper. There were few Chelsea protests as Troy Deeney converted the penalty low to his left.

It was only the captain’s third league goal of a stop-start season, all spot-kicks rammed home against top six opponents. Conte was rather subdued by his standards on the sidelines, as if resigned to another setback, though his frustration surfaced at Richarlison’s foul, prompting words of warning from Mike Dean.

The Chelsea support had chorused the Italian’s name – their faith remains – but the rot has set in this year, the odd flare of quality aside. Pedro and Willian had blazed shots into the Rookery but, having surrendered a man, their ambitions had been limited to the counter-attack.

The hosts duly revelled in the ascendancy. Watford’s own campaign had been threatening to unravel, that dreadful run of one win in 12 league games having cost an apparently distracted Marco Silva his position, but Javi Gracia will hope this is a sign of things to come.

In Deulofeu they may have plucked a player from La Liga who can set them apart from those labouring in the relegation scrap: it was his low, skimmed drive which had Courtois plunging desperately to his left only for the ball to bobble wide. Richarlison, too, caused the Belgian to panic and he was relieved to see the shot veer behind. The goalkeeper was more decisive in pushing away Doucouré’s fine attempt.

Such profligacy did not feel critical at the time only for Hazard, gathering possession and cutting infield, to conjure that stunning equaliser out of nothing, the ball dipping deliciously under Orestis Karnezis’s outstretched left hand to nestle in the corner of the net. Briefly, tantalisingly, Chelsea sensed a point. As it was, this was never likely to be their night and Pereyra’s fine goal in added time proved it. – Guardian service