Alex Oxlade-Chamberlain out injured until at least May 2019 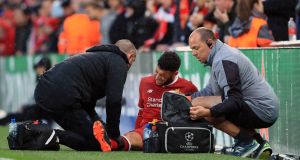 Alex Oxlade-Chamberlain of Liverpool is treated for an injury during the Champions League semi-final first leg clash with Roma. Photo: Marc Atkins/Offside/Getty Images

Alex Oxlade-Chamberlain has been ruled out of Liverpool’s plans for next season and Jürgen Klopp admits it will be “a bonus” if the midfielder plays a competitive game before May.

The 24-year-old missed the Champions League final and England’s World Cup campaign with a knee injury sustained against Roma on April 24th. It was confirmed on Wednesday that Oxlade-Chamberlain sustained multiple ligament damage and is expected to be out of action for up to 12 months in total.

Liverpool and the player knew the full extent of the injury within days of the semi-final first-leg victory at Anfield but refused to go public with the prognosis at the request of the England international. Oxlade-Chamberlain did not want the severity of the damage to disturb teammates’ preparations for the Champions League final against Real Madrid and kept the news between himself, Klopp and the medical staff involved in his recovery.

The former Arsenal midfielder, who was in outstanding form before the Roma game, had a successful operation eight days after sustaining the injury. That is expected to be the only surgery required. His rehabilitation is on course and Liverpool do not view the injury as career-defining, although they accept it may take a full year from the time of the challenge at Anfield for the £40m signing to make a complete recovery.

Klopp said: “It feels like now is an appropriate time to tell people that for Ox this coming season will be about focusing on recovery and rehab.

“We have known this from pretty much the day after he got the injury and after the successful surgery we were sure of it. I hope everyone treats this information responsibly.

“There has been no change, no setback – it’s exactly on the schedule we expected and planned for. The new information is that we’re now giving more detail publicly.

“It is typical of Ox that he didn’t want the news to overshadow the end of the season and, to be quite honest, we thought we could wait and tell people at an appropriate time. His surgery – which he had on the day of our second leg in Rome – has been completely successful and his recovery has started superbly well. But the truth of the matter is that we are preparing this season knowing he will not be with us on the pitch for competitive matches for the majority of it. If we do see him back this season it will be a bonus.”

The length of Oxlade-Chamberlain’s absence will not affect Liverpool’s transfer business. Klopp has been resigned to the player’s absence since April and has already added Naby Keïta, Fabinho and Xherdan Shaqiri to his outfield options. Liverpool decided to disclose the extent of the injury before the Premier League season to avoid continued speculation over Oxlade-Chamberlain’s fitness.

“It is so important – because of how valuable and important he is to what we are looking to do here in the coming seasons – that the focus is on doing this right and not rushed,” Klopp said. “Ox is completely on board with this approach.

“He is such an outstandingly good person and someone who even when not playing is integral to the heartbeat of Melwood. I cannot wait to have him back with us for matches, but we will wait for him and we will show the patience that is required to make sure he comes back ready to continue where he left off: as one of the most outstanding performers in European football in that moment.” – Guardian service

Wimbledon will not be held this year due to coronavirus crisis 16:51
Playoffs set to be moved again as Uefa prioritise European club competitions 15:59
Harrington would prefer 12 picks over delayed Ryder Cup 09:06
Australian rugby staring into abyss as another crisis hits 09:03
Ringrose set for new central deal; memories of Björn Borg at Wimbledon 06:51

1 ‘For 25 minutes I ran out of oxygen’: Pepe Reina on his coronavirus battle
2 Six Nations rugby needs to be protected for terrestrial TV
3 Australian rugby staring into abyss as another crisis hits
4 Garry Ringrose to stay with Leinster as he signs two-year central contract
5 Playoffs set to be moved again as Uefa prioritise European club competitions
Real news has value SUBSCRIBE