Willian, Pedro, Branislav Ivanovic and Michy Batshuayi, with a penalty, all score goals 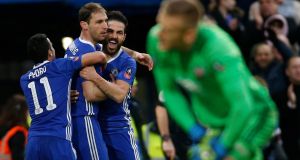 Branislav Ivanovic scored on his potential farewell appearance as Chelsea beat neighbours Brentford 4-0 in the FA Cup fourth round at Stamford Bridge.

Brentford, 15th in the Championship, took Chelsea to a replay four years ago, but there was little prospect of a repeat as the Blues claimed a 10th successive home win.

Willian, Pedro and Michy Batshuayi, with a penalty, were also on target for the Premier League leaders, whose only concern came when Willian went off midway through the second half after earlier holding his ankle.

Ivanovic replaced Willian and scored his 34th Chelsea goal on his 377th appearance, amid suggestions his nine-year stay at Stamford Bridge could come to an end before Tuesday’s transfer deadline.

Asmir Begovic, who will be allowed to leave for Bournemouth if Chelsea can find a replacement, made a number of key interventions to deny Brentford and show his value as Thibaut Courtois’ back-up.

Another potential goodbye came when striker Scott Hogan, linked with West Ham, came off the Brentford bench. It was his first involvement in the matchday squad for almost four weeks but he could not turn the match in Brentford’s favour.

Arsenal will attempt to stop Chelsea’s home run next Saturday in the Premier League.

Chelsea’s last home loss was to Tuesday’s league opponents Liverpool, who were dumped out of the FA Cup by Wolves earlier on Saturday.

Like Jurgen Klopp, Antonio Conte made nine changes against Sky Bet Championship opposition, with Pedro and Cesar Azpilicueta the only players retained following the win over Hull.

Brentford held their own before Lasse Vibe was penalised for a body check on Pedro. Bees complaints were dismissed.

Willian took the resulting free-kick and curled it beyond Daniel Bentley.

Soon it was 2-0. Batshuayi played the ball into the right channel. Ruben Loftus-Cheek left it for Pedro, who slid it beneath Bentley.

Batshuayi thought he had scored Chelsea’s third, but one scrambled chance was cleared before Pedro was offside as the Belgium striker found the net.

Loftus-Cheek, who had a long-range shot tipped over, next snatched at a chance, firing straight at Bentley.

Brentford had opportunities either side of half-time. Yoann Barbet struck a volley at Begovic and the goalkeeper pounced to repel the danger as Vibe hesitated after John Terry’s slip.

Willian shrugged off a knock to his ankle to cut in from the left and shoot over.

The Brazilian ran at Brentford again. He fed Loftus-Cheek, who lifted the ball over the on-rushing Bentley but on to the bar.

Begovic spread himself to save at the feet of Nico Yennaris before Loftus-Cheek beat two men only for a third to block his effort.

Chelsea’s third finally came when Pedro ran down the right and fed the overlapping Ivanovic.

The Serbia right-back opted to power the ball low into the near corner before being enveloped by his team-mates.

Ivanovic, who has won ever major club honour since his January 2008 arrival from Lokomotiv Moscow, was then fouled by Barbet.

Batshuayi converted the resulting spot kick in an emphatic win.