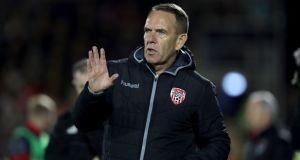 Derry City manager Kenny Shiels: his squad will be boosted by the availability of some new players. Photograph: Inpho

Three stern tests await Dundalk, Shamrock Rovers and Derry City on Thursday night as they get their Europa League qualifying campaigns under way.

Derry bring European football back to the Brandywell with a first-leg clash against Dinamo Minsk of Belarus, who are currently on a run of three wins in a row and sit just four points behind BATE Borisov in their domestic league.

City manager Kenny Shiels will be missing Nicky Low, while Gavin Peers is a doubt, but the squad will be boosted by the availability of some new players.

“Ally [Roy] and Aaron [Splaine] (who both scored in Derry’s win over Limerick on Friday) fitted in really well against Limerick at the weekend, and Ben Fisk has looked really lively in his games so far,” said Shiels.

“Dean Shiels will come into the squad now as well, so I hope that will give us some options that we may have been missing.”

Meanwhile, Stephen Kenny’s Dundalk have travelled to Estonia to take on league runners-up Levadia Tallinn, who were beaten 6-2 on aggregate last season by Cork City.

Dundalk come into the game on a streak of hot form with 13 wins in a row in all competitions, and will be favourites to see off a Levadia side who, like the Irish teams, are also in the middle of their season. If Dundalk are to go through they will meet AEK Larnaca who knocked Cork out last season after the Leesiders had beaten Levadia.

Kenny’s side will be hoping to do so without Marco Tagbajumi who, it was confirmed on Wednesday, has left the club, but Everton loanee Sam Byrne has signed permanent terms at Oriel Park after joining the club on his return from England at the start of the season.

Michael Duffy is a major doubt for the tie at the Kadriorg Stadium having limped out of last Friday’s 3-1 win away to St Patrick’s Athletic in Richmond Park with a groin injury.

Dylan Connolly may come in on the left wing to replace Duffy, while Dean Jarvis is also doubtful with a hip flexor injury. Stephen O’Donnell and Stephen Folan remain long-term absentees.

Back in Tallaght, Stephen Bradley’s Shamrock Rovers will meet AIK of Sweden who are heavy favourites to see off their Irish opposition as they currently top their domestic league with an unbeaten run stretching back to the start of the season.

However, Rovers come into this tie in good form with four league wins in a row, while 16-year-old goalkeeper Gavin Bazunu has become the talk of the league after his clean sheet and penalty save against Cork on Friday.

Rovers will make their 27th appearance in European competition in this game which sees them become the leading Irish team, overtaking Bohemians.