Diminished Dele Alli shows the gulf between talent and expectation

José Mourinho’s not done with Dele yet, but his days at Tottenham are surely numbered 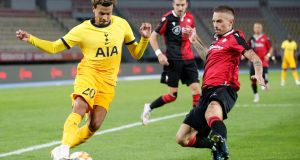 Adopt a José Mourinho-style scowl and think about Dele Alli for a bit, a footballer who really does have something to tell us about talent, expectation and the limits of both.

It has been another intriguing week in the Tottenham player’s career. On Thursday night he started against Shkëndija in the Europa League and did okay for an hour. The high point was a run from the centre circle that saw him gliding magisterially through his own personal jetstream before shooting against a defender. The worst moment came as the men from North Macedonia took a goal kick and José Mourinho could be heard shouting “Dele. Attention Dele. F***ing hell”, urging a man who has been capped 32 times by England to remember the basic details of a pressing drill.

How did we get here, to a place where Dele’s career to date looks like an investigation into the idea of what talent actually is, and how you make it work? There are those who will tell us he has simply found his level, that “the media” built him up unduly in his first two seasons at Spurs.

In reality Dele built himself up, winning the PFA young player gong two years in a row, and reaching a kind of peak three years ago in the 3-1 defeat of Real Madrid at Wembley. He scored twice that night, strode through a series of great, yawning holes in the Madrid defence and looked the most thrillingly razor-edged presence on the pitch.

Dele was 21 years old. Madrid should have been a moment of ignition. Three years on, Spurs are said to be looking for a way to cut their losses on a strangely diminished figure. Where did it go, that sense of joy, of skirling possibilities? Welcome to Dele Part Two: a mystery story.

At this point the presence of Mourinho feels entirely appropriate, a manager whose entire career could be seen as a reproachful assault on other people’s perceptions of what talent actually is, and who seems at least as obsessed by this topic as Sport England.

When José starts calling you talented, that’s when you need to worry. The first sign Tanguy Ndombele needed to get cracking came when Mourinho could be heard describing him as “a player with great talent”.

With Mourinho, talent is a kind of codeword for inflated value and slack to be trimmed

With Mourinho, talent is a kind of codeword for inflated value and slack to be trimmed. It is also what makes Dele-José such a fascinating interaction, and one that might not be done just yet.

At this point it is necessary to have some sympathy here for José the dream-stomper, who is, lest we forget, the manager of a team, not a one-to-one coach.

For all his seductive moments, Alli is also a very needy talented player, for whom clear strengths are combined with clear weaknesses, and where the ability to score and assist effectively rests on being slotted into the most precisely accommodating team patterns.

Dele needs to be central. He needs to play as a No 10, but a running not a passing No 10. He needs a striker ahead of him. He needs players who can carry the ball to make space for his runs.

Some talent is more brittle and less adaptable than other talent. Perhaps it is simply a lesser talent as a result. Son Heung-min, incidentally, can also make those runs, and he’s pretty good at taking orders.

It isn’t over for Dele by any means. But time is passing and the list of those who have regained a stellar trajectory after years of drift is quite small.

For now he seems a hostage to the deceptive ease of his finest moments, and to the overly linear notion that athletes always improve when in fact so many hit an early peak. And, above all, to the one thing we do know about this most thrillingly mysterious commodity: that nobody ever really has a plan. – Guardian

1 Golf clubs waiting to hear if they can stay open under Level 5
2 Wijnaldum attacks ‘stupid’ Pickford tackle on van Dijk
3 Dan Martin stakes podium claim on opening stage of Vuelta
4 Johnny Sexton aware of how Ireland can offer fans an escape
5 Here is your handy guide to sport on television this week
Real news has value SUBSCRIBE
Crossword Get access to over 6,000 interactive crosswords