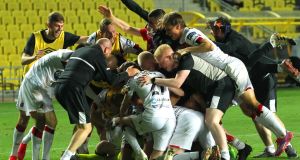 Filippo Giovagnoli had insisted his players would perform in this Europa League qualifier and though the game was not one to remember, Dundalk did indeed deliver when it mattered. Having come from behind during the 90 minutes, then survived extra time unscathed, the Irish side produced a pretty much perfect penalty shoot-out: five good spot kicks, one excellent save.

“Inside me, I knew we were going through,” said the Italian afterwards, “because I trust this group. I am always positive but they make me trust them and so I was sure.

Their reward for what they did here is €300,000 in prize money and a crack at a guarantee of 10 times that when Klaksvikar Itrottarfelag of the Faroe Islands travel to the Aviva Stadium next Thursday.

On paper, the game represents an outstanding opportunity for Dundalk to repeat their success of four years ago by reaching the group stages of Uefa’s second club competition. The 6-1 scoreline in their opponents’ defeat of the once mighty Dinamo Tblisi while they were narrowly edging through half a continent away will most likely serve to keep their feet on the ground over the next seven days.

The scale of the elation at the end of the spot kicks was entirely understandable, though. The game itself had been a bit of a battle but after it became clear that they weren’t remotely out of their depth, Dundalk comfortably held their own. The hosts might well have nicked it late on in extra-time but it was Giovagnoli’s side who carved out the better chances over the 120 minutes; not too many of them mind, but enough to keep confidence levels up.

It showed in the penalty shoot-out. Dundalk went first and Stefan Colovic then Pat Hoban both beat Croatian goalkeeper Zvonomir Mikulic to his right. When Gary Rogers then saved from Faith Friday Obilor, the momentum was all behind the Irish side with Seán Hoare, Pat McEleney and Chris Shields having to hold their nerve in order to book Dundalk’s place in the playoff round.

All three produced perfect efforts and, with the 5-3 win secured, the celebrations seemed to be under way even before Shield’s strike had hit the back of the net.

It was quite an end to a night that had not started nearly so well. The visitors had fallen behind just eight minutes in to a poorly defended corner with Andriy Blyznychenko swinging the ball in from the right and local skipper Veaceslav Posmac getting well away from Brian Gartland to head home unchallenged just beyond the near post.

Sheriff, though, struggled to build on the early advantage in what was a disjointed contest, punctuated by regular stoppages for minor fouls and through the half that followed it became entirely clear that the Irish side were well capable of getting themselves back into things.

They passed up a couple of half-chances from set pieces but eventually succeeded in equalising two minutes into stoppage time at the end of the first period when Daniel Cleary powered forward through midfield and the referee played a good advantage as he was brought down a split second after feeding the ball out to Michael Duffy.

The Derryman quickly cut inside and floated the ball towards the edge of the six yard box where Seán Murray headed a queue of men in white shirts waiting for their chance. The 26-year-old seized his, getting up high and ahead of the goalkeeper to get his head to the cross and help it on to the far corner.

He had been replaced well before the game was decided but the goal gave his side a glimpse of a place in the next round. They are within sight of the group stages now but they will have to justify their manager’s belief and perform again.

1 Seán O’Brien: Anger over my parents’ break-up never left me
2 Plenty of positives for Farrell as Ireland hit the ground running
3 Madness or defiance? The GAA is taking a huge gamble in staging Championships
4 The Offload: Outgoing Tom Grace will be missed by IRFU
5 All in the Game: Klopp’s Amsterdam subs don’t go down well
Real news has value SUBSCRIBE
Crossword Get access to over 6,000 interactive crosswords