Dundalk’s horizons widen ahead of clash with leaders Shamrock Rovers 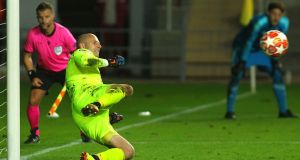 Having still looked a potential title decider when the league restarted a few short weeks ago, the visit of Shamrock to Oriel Park on Sunday evening suddenly seems more like a sideshow in the wake of Dundalk’s defeat of Sheriff Tiraspol on Thursday night.

The league champions now find themselves with bigger fish to fry than chasing what already looks like a lost cause on home soil and though there were moves on Friday to have the game put back, the FAI confirmed late in the day that they fully expect it to proceed as planned.

“Ideally you’d like it to be postponed to maximise your chances of going through in Europe,” said Dundalk’s goalkeeper Gary Rogers, whose save the previous evening had paved the way to his side securing their playoff shot against KI of the Faroe Islands next Thursday at the Aviva.

“But we’ve a big squad and Filippo [Giovagnoli] will put out a team that he thinks can do the business. There are plenty of players who will want to play, lads who need the minutes; Andy Boyle will be available again after being suspended against Sheriff and Chris Shields is out for next week so, there are things for the manager to weigh up.

“Obviously, it would be nice to go into the KI game off the back of a win but Europe has to be a consideration, even Shane Keegan and the analysis team might feel that they know Rovers well enough and that the priority is start looking at what we will be up against next week,” added Rogers, who celebrated his 39th birthday on Friday.

The financial stakes are certainly high. If they lose against the Faroese there is a consolation payment of €300,000 but winning would mean a place in the group stages, a guaranteed €2.92 million and €190,000 for every point they can secure after that. A repeat of the four achieved under Stephen Kenny in 2016 would be worth another €760,000 although clearly the club’s wider earning power is likely to be severely curtailed by the continued exclusion of spectators from games.

The prospect of any financial windfall on that scale coming the way of such significant rivals may not be entirely to Rovers’ liking, but if Dundalk’s focus is elsewhere this weekend then they will be keen to capitalise on any opportunity to take what would a big step towards securing the title by beating the reigning champions again.

Roberto Lopes is said to have recovered from the injury that forced him off towards the end of the 6-1 defeat on Waterford on Monday and Danny Lafferty comes back into the reckoning for the league leaders.

1 Seán O’Brien: Anger over my parents’ break-up never left me
2 Ireland braced for a daunting assignment in Paris
3 Plenty of positives for Farrell as Ireland hit the ground running
4 Will Connors chops his way to the front of Ireland’s openside queue
5 Ireland 50 Italy 17: Ireland player ratings
Real news has value SUBSCRIBE