Can Thiago bring the right dynamics to save Liverpool from entropy?

Jürgen Klopp’s new player is disrupting the gameplan, which is just what the side needs 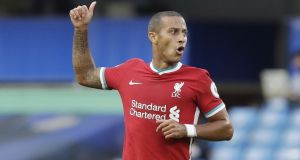 Thiago Alcântara: he should allow Liverpool better to control games without expending the same levels of energy. Photograph: Matt Dunham/EPA

All great sides are haunted by entropy. Even in their most transcendent moments, it is there in the shadows, hissing its insistent question: “What next?”

When Liverpool won the Champions League in Madrid the answer was clear: there was another peak still to be scaled, and they did it last season by winning their first league title in 30 years. But after two years in which they achieved the second- and fourth-highest ever points totals, how can they maintain that level? How can they avoid the trajectory of Manchester City who, after a pair of similarly brilliant seasons, suffered an 18-point drop-off? For Jürgen Klopp, the answer is Thiago Alcântara.

The doubts are always lurking. Is this as good as it gets? How do you keep going? Whose hunger has begun to wane? Are others beginning to catch up or catch on? Peter Reid was derided when he noted that, in football, “if you stand still you go backwards”, but he was right. It is an environment that is always changing; opponents are always adapting; age and satiation are always sapping at your own players. That’s why, proverbially at least, the second title is always harder than the first, why only five sides in the history of English football have won three league titles in a row (and two of them changed manager on the way). The growing inequalities in English football may have led to increasing domination by a cabal of clubs, but sustained success remains hard.

Alex Ferguson is unique. Nobody else in English football has ever had such success over such a protracted period. That he benefited, particularly in the 1990s, from Manchester United’s adept exploitation of the new commercial possibilities of the Premier League is clear, but equally he crafted three great United sides, the last of them when United were no longer the sole financial powerhouse. But his capacity to constantly evolve is extremely rare.

As a rule of thumb, even the very best managers can sustain around a decade at the very top of the game. To do it at one club is especially difficult. As the great Hungarian coach Béla Guttmann observed, “the third year is fatal”: players become familiar with a manager so his words lose their power; an intensity that once was motivational begins to grate; opponents work sides out – and in the age of detailed data analysis that is a process that has accelerated significantly.

It’s a guide rather than a universal formula but, seven decades on, Guttmann’s three-year rule still broadly holds true, particularly when the task becomes to maintain the level rather than to keep ascending. José Mourinho’s struggles in his third seasons are well-documented. The two occasions Pep Guardiola has reached a fourth season at a club have seen a marked downturn.

Ferguson was a master of culling players at just the right time to refresh his squad and pour encourager les autres. Bob Paisley, more ruthless than his predecessor Bill Shankly, was a master of buying at a time of success to prevent the onset of stagnation. Others, the dynasty managers – and Klopp would seem an example of that type – prefer to create a movement, a sense of collective destiny. The club becomes a sort of family, striving for a common goal, and that perhaps extends the period before weariness sets in. Ferguson’s early sides at United, being rooted in a core of players who had come through the youth set-up, had elements of that.

The danger, though, is what happened to Shankly’s first Liverpool or Don Revie’s Leeds: a team that grow old together so that when the crash comes it is universal. Klopp suffered something similar at Dortmund: after six years of excellence, his players collectively hit a wall in their seventh.

One of the strengths of the side he has built so impressively at Anfield is that a core have peaked together. Only James Milner of last season’s regulars was over 30 at the start of the campaign. But with that comes a danger: at some point new blood needs to be introduced. That is not simply a matter of age but also of style – and that’s why the signing of Thiago is so striking.

As well as running and pressing opponents to death, they should now be able to pass them into oblivion as well

The midfielder is 29. He does not lower the age profile of the team. In that sense, Thiago is a short-term solution. But he is a very different type of midfielder to those already at Anfield. The job of Liverpool’s midfield previously was to win the ball as high up the field as possible. They were the perfect example of Klopp’s observation that gegenpressing is the best playmaker in the game. In that, Klopp is at the forefront of a German school that has shifted the focus away from retaining possession towards regaining it.

Thiago represents a shift away from that; on a theoretical level, it is a step back towards the mainstream, towards something less radically percussive. This is the opposite of what Guardiola attempted in his fourth season at Barcelona, when he seemingly tried to take his revolutionary juego de posición a step further.

But Thiago is such an unusual player, such an extraordinarily gifted passer, in terms of accuracy, intelligence and variety, this can’t be regarded as a conservative move. Rather he should allow Liverpool better to control games without expending the same levels of energy. As well as running and pressing opponents to death, they should now be able to pass them into oblivion as well.

It will, though, mean changes. Trent Alexander-Arnold, for instance, was notably less involved as an attacking presence in the second half at Chelsea on Sunday. After Thiago came on, he delivered just one cross and played 28 per cent fewer passes into the final third than he had in the first half. That may be temporary as players get used to each other and, even if it is not, it’s not necessarily a bad thing. A reduced workload may benefit the right-back in the long run, it may make Liverpool defensively more solid, and his forays down the right may be even more effective for being less consistent, but there is obviously a risk in potentially sacrificing a reliable attacking weapon in the quest for great variety. But then that’s the nature of evolution: progress rarely comes without some cost.

The specifics of how Thiago will fit in will become clearer over the next few weeks. For now, though, the most significant thing is that Klopp has made a decisive tweak to his gameplan. He has introduced a very fine player who is also a disruptive element and that, at least, should keep entropy at bay a little longer.