Derby wins moves Atalanta to second in Serie A 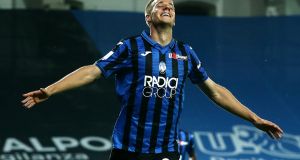 Atalanta’s Mario Pasalic scored three goals in his team’s win over Brescia at the Gewiss Stadium in Bergamo. Photograph: EPA

Mario Pasalic scored a hat-trick as Atalanta stormed to a 6-2 win over derby rivals Brescia to go second in the Serie A table.

After Pasalic struck in just the second minute, Brescia were able to draw level in the eighth through Ernesto Torregrossa, but after that it was all in favour of the home side.

Atalanta extended their lead to 4-1 at the break through Marten De Roon, Ruslan Malinovskyi and Duvan Zapata, before Pasalic added two more in the second half to complete his hat-trick.

The three points moved Atalanta above Inter Milan and Lazio and six points behind leaders Juventus.

Meanwhile Benfica kept their slim hopes of winning the Portuguese title alive as a first-half goal from midfielder Chiquinho and a late second from substitute Haris Seferovic gave them a hard-fought 2-0 home win over Vitoria de Guimaraes.

The victory leaves Benfica on 71 points after 32 games, five behind leaders Porto. Having beaten Benfica twice this season, Porto will secure their 29th league title if they can manage at least a draw with Sporting on Wednesday.

The visitors started well with Marcus Edwards thumping an early shot off the underside of the crossbar and Bruno Duarte having a great chance cleared off the line.

Benfica took the lead in the 37th minute when Franco Cervi won a battle for possession to send the ball out to Nuno Tavares on the left, and his cross eventually found Chiquinho who thumped the ball home for his second goal of the season.

Guimaraes substitute Joao Pedro thought he had handed the title to Porto when he rifled the ball home from close range after a set piece in the 85th minute, but the flag went up for offside and the goal was ruled out.

Seferovic, who had almost added a second with a spectacular chip that was tipped over the bar by keeper Douglas Jesus, made no mistake with a first-time effort to make it 2-0 in the 87th minute to keep the title race alive.

1 Madigan’s primary goal is Ireland caps after switch to Ulster
2 Seán Moran: It won’t take much before cancelling All-Ireland looks like a solution
3 My sporting disappointment: Battered, bloodied, broken by The Wall
4 View from Melbourne: Sporting fabric of the city suffering from second lockdown
5 Atalanta hope to bring joy to Bergamo after city’s darkest hour
Real news has value SUBSCRIBE
Crossword Get access to over 6,000 interactive crosswords