Dave Hannigan: When the IRA tried to burn down Old Trafford in 1921 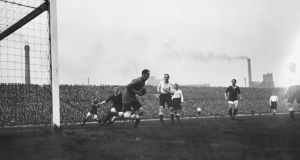 Action between Manchester United and Tottenham at Old Trafford in 1913. Photograph: Hulton Archive/Getty

Constable Thomas Carr was patrolling the perimeter of WT Glover Cable Works, next door to Manchester United Football Club, near midnight on March, 22nd, 1921. Climbing a slag heap to take a closer look at the venue due to host Wolverhampton Wanderers versus Cardiff City in an FA Cup semi-final replay the next evening, he caught sight of three men lurking near one of the entrances. At that hour. On a Tuesday night. In the shadows. When he shouted to ask them what they were doing, an Irish accent replied: “We are on guard.” Then two of them produced pistols from their coats and started shooting.

Carr ducked, lost his footing and saved his own life, tumbling back down the heap as bullets whizzed by overhead. By the time he was able to give chase, the mysterious trio had disappeared into the stygian gloom of a Manchester night, in their haste leaving behind crucial clues to their true intentions. A search of the stadium uncovered three bottles full of what was believed to be paraffin and it was quickly deduced that burning down the largely wooden stands ahead of a major sporting event was the type of spectacular favoured by the Irish Republican Army in Britain at that particular point in the War of Independence.

However, there is no evidence that Michael Collins, who famously denounced soccer as “the garrison game” because it aided “the peaceful penetration of Ireland by the British”, had ordered the attack out of personal loathing for the sport.

Police also discovered a wallet, the contents of which included a photograph of Terence MacSwiney, the Lord Mayor of Cork who had recently died a martyr’s death on hunger strike in Brixton Prison, and an infirmary out-patient’s card belonging to Patrick Fennell. A 23-year-old labourer from Cooladerry, Ballyporeen in Tipperary, Fennell was pulled from his bed at his lodgings on Bedford Street in Chorlton-on-Medlock the next morning and charged with the attempted murder of Constable Carr. As he stood in the dock at County Court, the advocate for the crown stated the trio’s “wicked purpose” had been to burn Manchester United’s stadium to the ground.

With an estimated 20,000 Sinn Feiners living in the city, it was a frenetic time for the IRA in Manchester. What became known in the English papers as “The United Football Ground Affair” came in between ambitious plans to cause a power outage and blow up the water supply, and an ongoing arson campaign against farms, factories and warehouses. Following a coordinated series of such attacks early on April 2nd, the police raided the Erskine Street Irish club in Hulme, presumed epicentre of all paramilitary activity.

During the gun fight that ensued, Seán Morgan, reputed to be the IRA’s top hitman in the city, was killed and 19 others arrested. Among them was 17-year-old Daniel McNicholl who turned state’s evidence once in custody, telling the authorities: “Do you know you have got the men for the Trafford Park affair, when they tried to stop the cup tie?”

At his trial in July, Fennell pled not guilty, admitting to being a lieutenant in the IRA 2 Company, a role he swore had never brought him into contact with a revolver of any kind. His protestations of innocence were bolstered from an unlikely source. Charles Harding, self-proclaimed IRA Captain and fellow Tipperary man, was called as a defence witness, just days after being sentenced to 15 years for treason following his arrest in the Erskine Street round-up.

“If you want the right man in the dock, put me in!” said Harding, spinning a tale that involved him borrowing Fennell’s trench coat as he headed off to burn down the stadium, accompanied by the now conveniently deceased Seán Morgan and a man called Barrett who’d since fled to Ireland. In Harding’s account of the evening, the vigilant constable had spotted them about to torch the stand and fired the first shot before they retaliated. And all this took place while the misfortunate Fennell was asleep in his bed, oblivious.

After initial and lengthy deliberations, the jury found Fennell “guilty of being there but not of the actual shooting.” Justice Rigby Swift admonished the judgment, declaring it was not a real verdict and sending them back out to reconsider. Just a few minutes later, they returned to the court, having changed their finding to an unequivocal “guilty”. “If I was there, I would admit it,” said Fennell before Swift, acknowledging he had no idea who shot at Carr, sentenced him to seven years penal servitude.

Having served time in Dartmoor, Wormwood Scrubs, and Strangeways, Fennell was released in February, 1922, along with Harding, in the general amnesty for IRA prisoners in Britain. On their return to Manchester, they were given a heroes’ welcome at a function at the Grosvenor Hotel, a couple of miles from the ground that one and/or both of them tried to destroy less than a year earlier.

Having fought for the anti-Treaty forces in the Civil War, Fennell eventually emigrated to Boston, settling in the Irish enclave of Roxbury. In 1942, he was awarded one and a half years pension for his service during the War of Independence.

His application cited several missions of active duty in that conflict, including the attempted burning of hay barrels at the ground by then known as Old Trafford.