Arsenal manager unhappy with the general standard of refereeing in Turkey 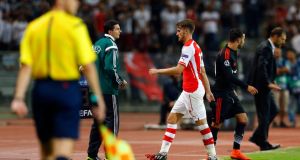 Arsenal’s Aaron Ramsey leaves the field after receiving a red card during the first leg of their Champions League qualifying soccer match against Besiktas at Ataturk Olympic stadium in Istanbul. Photograph: Murad Sezer/Reuters

Arsenal manager Arsene Wenger hit out at the sending off of midfielder Aaron Ramsey as his side battled to a goalless draw with Besiktas in the first leg of their Champions League play-off at the Ataturk Olympic Stadium.

The Gunners were stretched by Slaven Bilic’s well-drilled outfit, who almost took the lead right from kick-off through a long-range effort by former Chelsea striker Demba Ba.

However, crucially Arsenal held out and could have netted a crucial away goal themselves but for some poor finishing by Olivier Giroud, while substitute Alex Oxlade-Chamberlain watched his shot touched onto the post in the closing stages.

Arsenal, though, will welcome back German World Cup winning trio Mesut Ozil, Per Mertesacker and Lukas Podolski ahead of next week’s second leg at the Emirates Stadium, when they will be out to secure a remarkable 17th successive campaign in the lucrative group stages of Europe’s elite club competition.

Despite leaving Istanbul with a positive result, Wenger was less than impressed by the overall performance of Serbian referee Milorad Mazic, who sent Besiktas boss Bilic to the stands just before full-time.

“Neither the first nor the second yellow card was deserved for Aaron Ramsey. When you see some of the fouls that have been made and we go home with Ramsey (given) a red card, it is a bit unbelievable,” said Wenger, who also confirmed he had reported to UEFA an object been thrown at him as he left the pitch at full-time.

“In the second half the performance of the referee was very bad. Ramsey’s second yellow card, I cannot see where that comes from, it was a huge decision.

“I felt just a lot was wrong in the second half but, overall, it was a difficult game maybe to referee as well because everybody did fight for every ball, so maybe it was not easy for the referee as well.”

Nevertheless, Wenger was happy enough to have seen his side leave undefeated, if counting the loss of captain Mikel Arteta to an ankle injury.

“It was a difficult match, played at a high pace. Besiktas played with 100 per cent pace in the game and did fight for every single ball, and it was quick. We needed a great level of concentration,” he said.

“We are maybe still a bit short physically in some situations, but overall it was a game played for 90 minutes at great pace.”

“We know the second leg will be certainly tight again, but we play at home, so the task is clear for us, we want to win.”

Arsenal have been linked with a move for Olympiacos defender Kostas Manolas, to cover the departure of captain Thomas Vermaelen.

Wenger, though, insisted a deal was not imminent. “I have nothing special to add on that at the moment. Honestly, we are not close to signing anybody,” he said. “We are a bit short at the back, yes.

“I am worried, but we should have Mertesacker and Ozil and Podolski available again at the weekend, so let’s hope they are in good shape when we go home.”

Bilic is confident he will be able to lead his side at the Emirates Stadium, having apologised for his indiscretion.

The former West Ham and Everton defender said: “I don’t know the rules, but I see no reason for me not to be in the dugout in London. If that was a reason, many coaches would be missing from the dugout.

“I have apologised. I made a mistake. Maybe I overreacted in that situation when he stopped the game we were in a good position, two against one.

“He just showed me the way (off). After the game I apologised to him and to Mr Wenger. No hard feelings or whatever.”

Bilic hopes his men can lift themselves for a big performance next week. “We are going to London not to go shopping in Harrods, but to try to fulfil some would say our dream, I would say our task, our plan. We are big time alive, though. I am really optimistic.”

1 Super Rugby AU offers glimpse of rugby’s future if law changes are adopted
2 Solskjær says United’s unbeaten run is ‘nowhere near’ enough
3 Cam Newton broke the mould: Can his flame be rekindled at the Patriots?
4 Seán Moran: This strange year would have been perfect for inaugural Tailteann Cup
5 Tipping Point: DeChambeau’s transformation raises questions, but who will ask them?
Real news has value SUBSCRIBE