TV View: Liverpool’s bows and arrows fail to hit their target at Anfield 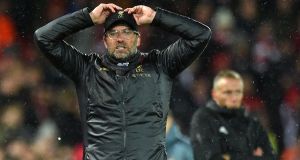 Liverpool manager Jürgen Klopp gestures on the touchline during the Champions League round of 16 first leg at Anfield stadium. Photograph: Oli Scarff/AFP/Getty Images

Granted, there’s been a blip or three of late, but still, Liverpool fans would surely have had a reasonable helping of hope in their hearts as they took to their couches to listen to the pre-match chat. At which point they might well have switched over to Fair City, the pundits having given them a dose of the collywobbles.

They already knew they’d be Van Dijk-less, him being suspended, but any attempt to convince themselves that it’d be all right on the night was somewhat undermined by the collective reaction to the news that Matip and Fabinho would be Liverpool’s central defensive pairing against Bayern Munich.

The faces of the RTÉ team of Liam Brady, Kevin Doyle and Richie Sadlier and BT Sport’s Rio Ferdinand, Owen Hargreaves and Luis Garcia all pretty much said the same: ‘Mother of J***s.’

Rio meant no disrespect to Matip and Fabinho, but delivered a heap of it all the same, suggesting that because they’d hadn’t played alongside each other very often, they’d be strangers in the night.

“Partnerships are built on, you know, getting to know your partner,” he explained, an insight that had Jake Humphrey nodding in appreciation. “If Robert Lewandowski comes out of this game without scoring a goal,” Rio continued, “I’m telling ya, he’ll be kicking the doors off on in that changing room.”

But then again, Rio also thought United would beat PSG, so there was no comfort here for the Liverpool faithful.

Nor was there any to be found in the fate-goading business, Darragh Maloney reminding Didi Hamann, who was pitchside at Anfield, that he’d severely irked Lewandowski very recently by suggesting that he’d become a problem rather than an asset for Bayern, his assessment leaving the Polish lad so peeved that it was highly likely he’d arrive in Anfield hell-bent on proving that it’s never wise to disturb a bee’s nest.

And then Richie turned his sights on James Rodriguez – “so inconsistent, a disappointment, I don’t know if he has the temperament to handle the atmosphere in Anfield tonight” – which might have left said Liverpool fans with a premonition along the lines of James battling Robert for the match ball, both having scored a hat-trick.

Anything else? Oh yeah. Liam: “I think German football is in decline.” And as any seasoned campaigner would know by now, you should never write off the Germans.

It was around then that a bicycle-kicking Lewandowski, suspended in mid-air, appeared in the RTÉ studio, hovering a little bit perilously above Liam’s head, and that might well have been taken as an omen that it would be a night of highs for the fella.

So, a draining build-up, not helped by Kevin’s jacket which was last seen on the bass player in Dickie Rock’s backing band.

The only uplifting bit was back on BT where Des Kelly was having a (recorded) chat with Jürgen Klopp, reminding him of what he’d said in his Borussia Dortmund-gaffering days: “We have a bow and arrow and if we aim well, we can hit the target. The problem is that Bayern have a bazooka.”

“Have Liverpool a bazooka,” asked Des.

Jürgen flashed his Colgate smile, and we took that as a yes.

Meanwhile, there was someone in Anfield holding up a ‘Klopp Lifts Us Up Where We Belong’ banner. No, there was.

Teams out. Champions League tune time, except it was drowned out by You’ll Never Walk Alone, the home crowd showing shocking disrespect for the anthem of the nation of Uefa. Expect a fine.

Ray Houghton co-commentating on RTÉ, Jim Beglin over on BT, Sophie’s Choice all over again.

A lively, if scoreless, first half, the closest we came to a goal when Matip almost put the ball past his own goalkeeper. Lewandowski could only watch and purr.

Come half-time, Kevin saluted Liverpool for having 11 attempts on goal, but “it’s balls in to the box, ifs and buts, time after time,” he said, channelling his inner Cyndi Lauper.

Second half. “Has Lewandowski even had a shot,” Ray wondered, George Hamilton not able to recall any, Didi possibly running his fingers through his hair in the background. The doors of the Anfield away dressing room? RIP.

But Robert wasn’t alone, not a bazooka in sight all night, just a collection of bows and arrows missing the target. Matip and Fabinho proving impregnable too. Gas old game.