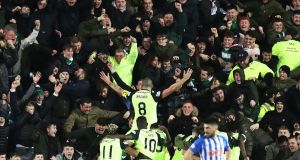 Scott Brown of Celtic celebrates after he scores the winning goal during the Scottish Premiership win over Kilmarnock at Rugby Park. Photo: Ian MacNicol/Getty Images

Nearest challengers Rangers’ goalless draw at home to St Johnstone on Saturday offered the Hoops the opportunity to put down a significant deposit on their eighth successive title win but they were matched by Killie in the goalless first 45 minutes.

Steve Clarke’s men also gave as good they got in the second half until defender Kirk Broadfoot was sent off for a high challenge on Brown in the 75th minute.

It looked like the visitors would have to settle for a draw until the Hoops midfielder fired in a deflected shot which sparked a pitch invasion by ecstatic Parkhead fans with Brown, already booked by referee Bobby Madden, shown a second yellow for running into the crowd.

It was the most dramatic victory for Celtic to stretch further ahead with their eighth successive domestic win of 2019.

Odsonne Edouard, back in the Celtic side along with left-back Jonny Hayes and central defender Kristoffer Ajer, threatened early as the Hoops started with purpose.

In the eighth minute, the French striker took a James Forrest pass 10 yards from goal, turned and fired inches wide.

Moments later, a more accurate drive on the angle after being played in by midfielder Ryan Christie was beaten away by Killie keeper Daniel Bachmann who gathered Forrest’s chip from the loose ball.

Before that flurry of Celtic activity, fit-again Killie attacker Eamonn Brophy, back in place of loan midfielder Youssouf Mulumbu who could not feature against his parent club, had a good shot saved by Hoops keeper Scott Bain but the offside flag was up.

Killie slowly worked their way into the match and in the 18th minute, Chris Burke’s corner from the left was glanced just wide by the head of another former Rangers player Broadfoot.

Killie came close again after the half hour mark when a terrific pass by skipper Gary Dicker sent Burke scampering down the right and when he picked out Brophy, it required a timely block on the shot by Parkhead defender Dedryck Boyata to save the day.

Celtic’s frustrations were shown when Brown was booked by Madden for a slide tackle on Killie left-back Greg Taylor.

The Ayrshire side forced a couple of corners at the start of the second half amid some concerted pressure.

The Hoops fans who occupied the stands behind both goals urged their side forward but the tenacious home side would not let them settle.

Just after the hour mark Kilmarnock striker Conor McAleny powered a drive past Bain but referee Madden had whistled for handball.

Oliver Burke replaced Edouard in the 68th minute as Celtic struggled to overpower their hard-working hosts but they left themselves a man short when Broadfoot went in high on Brown 45 yards from goal, Madden reaching for red.

Celtic began to press and Christie headed a Hayes cross just past the post before Ivory coast forward Vakoun Bayo came on to make his Hoops debut for Christie.

However, when it looked like heading for a draw, Brown drove in a shot from the edge of the box which took a deflection off Bruce before nestling in the net.

Brown received a second yellow for running into the fans and when those had encroached got back into their seats, there was time for Weah to hit the post with a shot, albeit that was academic.