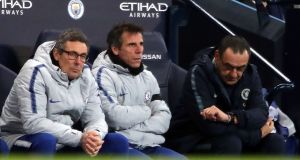 Maurizio Sarri has made subtle adjustments to his preferred style of play in an attempt to adapt to the demands of the English game with Chelsea and, according to his assistant, Gianfranco Zola, should be granted the same patience afforded Pep Guardiola at Manchester City.

Chelsea go into tonight’s FA Cup fifth-round tie with Manchester United still competing in three cup competitions and just a point off the top four in the Premier League.

Yet results and performances have been wildly unpredictable of late with Sarri’s apparent intransigence in terms of adapting his favoured philosophy prompting discontent within the club’s fanbase, and his position under scrutiny. The board had recruited the 60-year-old from Napoli last summer knowing he would stand by the concept of ‘Sarri-ball’, and had duly signed Jorginho from his former club to act as an on-field lieutenant imposing the tactical approach.

Yet they, too, were left dismayed by the recent humiliating losses at Bournemouth and City, Chelsea’s worst of the Premier League era, and are seeking evidence of pragmatism in the short-term as the team target Champions League qualification.

Zola, who was appointed to the coaching staff last summer following the dismissal of Antonio Conte, conceded Sarri’s plans are “ambitious” to implement in such a competitive environment while also maintaining immediate standards.

But, as the team embark on a pivotal nine-day period which could define their season, he refuted the idea that his compatriot has been too stubborn to adapt his game-plan for life in England.

“How do you know we are not making changes?” he asked. “We are adjusting a few things, understanding that this is the Premier League, but without changing where we want to go. The direction is always the same.

“I know there are questions about what we’re doing, a lot of doubts, but we are adapting to the league. What we’re trying to do is ambitious in a competitive league, and it’s not easy. But we believe it’s the right way and we carry on. Two years ago, people were probably asking the same questions of Pep Guardiola. Asking if he’d keep playing out from the back all the time.

“He said that was not under discussion and was just part of his game, even in difficult moments. Maybe he adapted. He has improved a lot in that respect because he got his team defending, pressing and attacking better. He has adjusted something, but not the way he saw football. You have to admire what Pep has done. Certainly he’s a good inspiration; not everything comes together straight away.”

Guardiola was granted considerable funds to smooth progression after a relatively underwhelming first season in the Premier League, and spent heavily to recruit the attack-minded full-backs who were key to last season’s runaway success.

It is doubtful Sarri will benefit from the same clout in the market in the summer, for all that the board backed his judgement to secure Gonzalo Higuaín last month.

The Argentinian is expected to return to the starting line-up at Stamford Bridge having been rested for the Europa League win in Malmö.

“There is a collaboration between Maurizio and Marina [Granovskaia, the club director] and they will come up with the right things,” said Zola. “But we have players here who can do even more than they’re doing, and we can go far as a team.”

The head coach conducted lengthy team meetings with his players after the recent losses to root out what he claims have been a lack of determination. David Luiz stated last week that there have been no dissenting voices in those meetings when Sarri has been promoting his philosophy to the group.

Yet this team have tended to collapse at the first sign of adversity in games. They will be severely tested by United, Manchester City in Sunday’s Carabao Cup final and next week’s visit of Tottenham Hotspur in the league.

Zola admitted there have been “painful” moments while the squad attempt to take on board Sarri’s demands.

“When you lose 6-0 you don’t enjoy it, but we did when we were winning 5-0 against Huddersfield,” he said. “There is a stage when you are working on something that, when it’s still not in place, you have to work harder.

“ Sometimes it can be difficult. But we will continue. We believe in what we are doing. I think the players like what we are doing, even if I know there are moments when it is painful.” – Guardian