Blockbuster turns out to be a bust as toothless Liverpool held 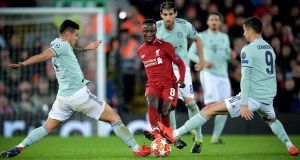 Liverpool’s Naby Keita in action against Bayern Munich’s James Rodriguez and Robert Lewandowski during the Champions League round of 16 first leg at Anfield. Photograph: Peter Powell/EPA

Jürgen Klopp’s prediction of a “blockbuster” between the two five-time champions of Europe was misplaced. His warning about the strength of his old adversaries from Bayern Munich was not. The wise heads rather than the old legs of the German champions prevailed as Liverpool were frustrated at Anfield for the first time in this season’s Champions League.

Liverpool maintained their record of never having lost to German opposition at home in Europe and extended their unbeaten run to 20 European ties at Anfield. A goalless draw will also stir memories of the 1981 semi-final, when Liverpool advanced on the away goals rule in the second leg in Munich. But these felt like meagre consolations for Klopp’s men against opponents who, under transition with Niko Kovac, have displayed rare vulnerability this season. But not here. Bayern were assured, resilient and rarely unsettled.

Sadio Mané had his chances to alter the complexion of the last 16 tie but, on a night when Alisson lapsed in the Liverpool goal, Bayern were at least unable to capitalise with a telling away goal. Liverpool must improve significantly on their European away performances so far this season to preserve their hopes of going one better in this season’s competition.

The Champions League has provided an inspirational release for Liverpool during barren times in the Premier League but the dynamic has altered with Klopp’s team in pursuit of the club’s first championship since 1990. Perhaps that explained the initial lack of intensity and certainty in Liverpool’s performance with a key domestic date awaiting at Manchester United on Sunday. Or perhaps, more likely, the team that has reigned supreme in Germany since 2012 were not the creaking, vulnerable unit advertised.

Bayern were patient, polished and intelligent in possession when on the front foot, albeit trapped inside their own penalty area regularly by Liverpool’s pressing game.

A feature of the opening exchanges was the goalkeeper Manuel Neuer waiting with the ball for an outlet that never materialised. Mats Hummels convened an urgent debrief during a break in play with David Alaba and Javi Martínez to address the problem and, once Thiago Alcântara and James Rodríguez offered an escape route, the visitors’ display improved significantly. It was aided in no small part, however, by Liverpool’s defence giving up chances far too cheaply for this level of competition.

A drop in the resilience and organisation that has characterised Liverpool’s title challenge might have been expected with Virgil van Dijk serving a one-match suspension but it was not his replacement, Fabinho, who offered Bayern encouragement in the first half.

Alisson, Klopp’s trusted goalkeeper, was consistently careless with his distribution and had already escaped with one loose pass to Thiago when he dawdled too long on a Joël Matip backpass. Robert Lewandowski hassled the Brazil international into an error that ended with Kingsley Coman breaking free on the left but shooting into the side-netting. In fairness to the Liverpool goalkeeper he made a vital block from Matip at close range when the central defender sliced a Serge Gnabry cross towards his own net.

Bayern also posed problems at set-pieces but, mercifully for Klopp’s anxiety levels on the touchline, his team rediscovered their defensive discipline and attacking vibrancy after the half-hour mark. Mohamed Salah had volleyed Liverpool’s first opportunity tamely at Neuer when picked out by a superb ball over the top from Jordan Henderson, who impressed against Bayern’s midfield three. The Egypt international also headed a clearer opening wide when Trent Alexander-Arnold’s inviting lob from the left found him unmarked at the back post.

Liverpool’s best chance of the first half landed at the feet of Mané. Roberto Firmino, able to preserve his record of featuring in every European game for Liverpool under Klopp having recovered from a virus, released Naby Keïta with a deft touch. Keita’s shot deflected off Niklas Süle into Mané who, unmarked but with his back to goal, dragged a shot well wide on the turn.

Mané attempted to make amends with a theatrical overhead kick from another deflected Keïta effort but with the same result. A trip on the Senegal international by Joshua Kimmich yielded the first booking of the night and ensured the influential full back will be suspended from the second leg in Munich.

Kimmich’s absence may be felt at the Allianz Arena. Fabinho minimised the impact of Van Dijk’s on Liverpool with a composed display in the heart of defence. Together, the Brazilian midfielder and Matip kept Lewandowski on the periphery of the contest with Bayern’s brightest moments provided by Coman and Gnabry down the flanks. The Poland striker’s first sense of goal arrived from a Coman cross early in the second half but Fabinho intervened with a well-timed tackle. He produced another to prevent the France international leading a dangerous counterattack late on.

The Bayern performance was increasingly safety-conscious the longer the stalemate remained, though inviting Liverpool forward in numbers was not without its risks. Süle was fortunate to see his clearance strike Andy Robertson and sail over Neuer but also wide of goal when he intercepted one Liverpool counterattack. Gnabry was required for a vital defensive touch just as Mané sized up another sight of Neuer’s goal as Liverpool searched for a breakthrough. – Guardian