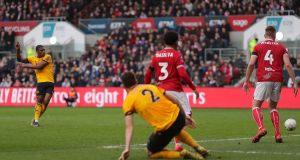 A major trophy within three years was not quite on the list of essentials when Fosun took over Wolves in 2016, but they are now serious contenders for an FA Cup win that would crown the club’s reconfiguration beyond all imagining. They will compete in the quarter-finals for the first time since 2003 and nobody will feel sure of dismissing such a composed, well-drilled and confident unit on a given day.

This was a professional job in which they controlled the first half before repelling a fightback from Bristol City, the country’s form side, who improved after the break and had them on the rack in the latter stages. Their winner was scored by Ivan Cavaleiro, who repeated his impact from the fourth round replay against Shrewsbury. Cavaleiro is not a regular starter in the league but his presence was a rare tweak by Nuno Espirito Santo, who took his reward for treating the challenge with high seriousness.

For Bristol City it was a mild anticlimax after an occasion that had been widely trailed as a resumption of hostilities between Lee Johnson and Espirito Santo. The latter had been sent to the stands during the sides’ Championship meeting here last season, before angering Johnson and City by wildly celebrating their last-minute winner. The pair did not seem on especially convivial terms this time, either, but shook hands at the end after a breathless finale. Johnson’s three years at Ashton Gate have been characterised by streaks of wildly differing form.

In November the discontent was audible after a run of two wins from 11 Championship games; now, after nine straight victories in all competitions and a 15-game unbeaten run, he is resoundingly flavour of the month again.

The Robins are fifth in the second tier and, earlier this month, Johnson held a meeting with members of the Section 82 to discuss how they might generate an atmosphere to push his team over the line.

They were given little encouragement in the early stages. It was Wolves’ noisy following who saw their side operate as they so often do, using the width of the pitch with laser-like switches from deep and forcing their hosts back. One corner from Joao Moutinho wafted across the penalty area without anyone getting a touch; a free-kick by the same player was cleared by Famara Diedhiou, the Bristol City striker, and it said plenty that this drew the opening 20 minutes’ loudest cheer.

It was from one of those diagonals that, shortly before the half-hour, Wolves made their breakthrough. You would be hard pressed to find two more improved players in the country than Conor Coady and Matt Doherty; here, the former launched the ball 70 yards and Doherty, bringing it down effortlessly, had a run at Jay Dasilva. The 20-year-old left-back, on loan from Chelsea, will make a fine player but was beaten far too easily here, allowing Doherty to wriggle into the box and size up his next move. It was judged perfectly, his cutback instantly dispatched by Cavaleiro from 12 yards. Frank Fielding might have been disappointed to see the finish planted down the middle of his goal, but the forward’s contact had been sweet.

Over the next five minutes Bristol City risked disintegrating. Doherty, reading a beautiful backheel from Raul Jimenez and letting fly, must have thought he had doubled the lead but rattled the far post. Then Fielding had to parry a fierce half-volley from Jimenez and Wolves, for whom an untracked Willy Boly also glanced wide, were looking a class apart. City’s openings had been limited to an acrobatic effort from Niclas Eliasson and a header by Kasey Palmer, both off target.

They needed a spark but it was their manager who provided the nearest thing to fireworks as the first half ended. He confronted Nuno, and also exchanged words with other Wolves staff, before heading down the tunnel; the cause of his ire was unknown but it suggested no hatchet-burying ceremony had yet taken place between the two, who are purportedly old friends from the Uefa A Licence course they took together in Scotland.

Perhaps Johnson’s real frustration was with his own team. He sent them out early for the second half and made two changes, introducing Marlon Pack and Matty Taylor, and they immediately went up a gear. Callum O’Dowda sent one delivery behind Taylor before laying another on for Dasilva, who had time to weigh up a shot on the edge of the box. He ballooned it over; it was a good chance and Wolves no longer looked quite as sleek.

John Ruddy, who replaced Rui Patricio in one of Nuno’s three changes from the draw with Newcastle, was then forced into his first significant action when Josh Brownhill’s deflected pass threatened to sneak inside his near post. At the other end, Fielding had to save from a Moutinho free-kick and a drive from Morgan Gibbs-White, the Wolves substitute. But they were never completely comfortable in closing the game out and, three minutes from time, Taylor’s looping header forced a tip-over from Ruddy. From the resulting corner Pack – who had earlier seen two efforts of his own gathered – could only watch as the ball bounced off him and over. Ruddy then blocked from none other than Fielding in a frantic period of stoppage time, and at last Wolves could await the last eight.