Ramos on the offensive as Real start Champions League defence

Captain says hole Cristiano Ronaldo left behind has been filled 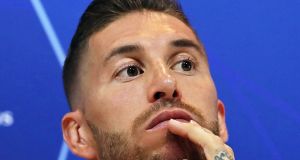 Real Madrid’s captain Sergio Ramos: “What can I say about Cris? He marked a wonderful era, he broke practically every record, but we can’t live off that.” Photograph: EPA

By the time the Champions League final comes around next June, Real Madrid will have been European champions for 1,100 days. On Wednesday they begin their journey there against Roma at the Santiago Bernabéu, a 20-minute drive from the Wanda Metropolitano where the final will be held, new home of rivals Atlético – the team they twice beat to take the title.

“No one has done what Madrid have done; no one has even got close,” said the Roma central defender Kostas Manolas. “Above all, we feel proud,” said Sergio Ramos, the captain. “It’s not chance.”

The question now is what chance Madrid extend that by another 365 days, claiming a fourth consecutive title, a fifth in six seasons? “They said it would be impossible to win two in a row but we did it,” Ramos said. “They said the same about three, and we did that as well. You have to feel [a champion] look it and have confidence, although without sticking your chest out because they’ll stick it back in again soon enough. It’s a very, very long road and there are very, very strong opponents but we’ll always have the ambition that made this the best club in history. We’ll compete, and we’re convinced we can win it.”

This time would be different. There is the location, for a start. Ramos admitted that playing a final at the Metropolitano was a “plus”, a source of extra motivation, and he also took the opportunity to respond to the Atlético striker Antoine Griezmann. A World Cup winner, Europa League champion and European Super Cup winner, Griezmann had asked what else he had to do to win the Ballon d’Or and had marked the Super Cup win over Real by posting a cartoon of him on a throne, crowned by Ramos. “Ignorance is bold,” Ramos said here, reciting a list of great players who had never won the award, including Totti, Buffon, Maldini, Xavi, Iniesta and Casillas.

If Griezmann wonders what else he must do, one answer of course is: win the Champions League, the trophy that made Cristiano Ronaldo the favourite over the past two years and a candidate again this time. In Madrid, though, there is more support for Luka Modric now. Not just because Modric reached the World Cup final but also of course because Ronaldo has departed after a decade. He had warned as much just minutes after the final in Kiev. Just minutes before it, he had told his team-mates: “It is worth killing ourselves to go down in history.”

Julen Lopetegui said of his Real Madrid side, post-Cristiano Ronaldo: “Now we’ve adapted . . . we have more possession, other ways of hurting opponents.”

Madrid did that, and then he was gone. If they are to extend that history, they must do it without Ronaldo. Of the likely starting XI on Wednesday, he is one of only two significant changes from last season – the other is the new signing Thibaut Courtois in goal – but this does feel like a different team. Not least because it has a different manager with different ideas: standing on the touchline there’s no longer any sign of Zinedine Zidane, the man who has won the Champions League in every season he has ever coached and who announced his departure five days after the final against Liverpool in May.

Zidane’s replacement, Julen Lopetegui, asked whether that loaded on more pressure, replied: “No. You take your hat off to Real Madrid, the squad and the coach. You acknowledge that [feat]. That’s all. Now we go into it with ambition, hope and work, determined to compete. There’s always pressure at a club like Real Madrid; that’s entirely logical. I don’t need to explain what the Champions League means to Real Madrid and what Real Madrid mean to the Champions League. We feel that responsibility, the ambition and desire.”

In the absence of Ronaldo, Lopetegui is constructing a team with a different personality and identity. It is early still but so far they have impressed, and there is little doubt about the quality. Roma’s Manolas was asked which Madrid player he would sign and told Marca: “All of them.” The Italian club’s coach, Eusebio Di Francesco, described Marco Asensio as a Ballon d’Or winner in the waiting. He also said: “Lopetegui is trying to give them more organisation, a more collective style, more aggressive. I see a more constant team.”

That is reflected by those Ronaldo left behind. Gareth Bale admitted that the atmosphere was more relaxed now. “I suppose there is more of a team, more working as one unit rather than one player,” he told the Daily Mail. Playing with a manager who speaks good English, Bale is likely to be one of the key beneficiaries. Some are daring to suggest that they might all be. “The hole he leaves has been filled, even though we know how big [that hole] is,” Ramos said. “We have a great squad. Cris gives you many things but maybe he takes things from you as well – very few, but some. We were more direct before, counterattacking, using his pace. Maybe now we’ve adapted to the squad: we have more possession, other ways of hurting opponents.

“We appreciate and feel affection for all the great players who have played for us – and he is one of them – but life goes on without them. We wish him the best, so long as it’s not against us. What can I say about Cris? He marked a wonderful era, he broke practically every record, but we can’t live off that.”