How can I watch Champions League on TV in Ireland? 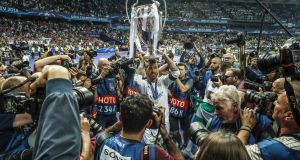 The Champions League kicks off on Tuesday with Manchester City installed as the bookies’ favourites while Real Madrid will go in search of a fourth consecutive title.

Liverpool, Barcelona and Tottenham are among the teams in action on opening night before the defending champions and the two Manchester clubs get their campaigns underway on Wednesday.

It’s the Tuesday and Wednesday night European action that well and truly sounds the final whistle on summer and signals the start of darker evenings which, at least, will be entertaining.

If you want to watch this year’s action you’ll have to pay attention because there are a few changes.

Firstly, what are the new kick-off times?

In a change this season, Champions League kick off times are now staggered across Tuesday and Wednesday evenings, much like the case with Europa League on a Tuesday. While all games used to kick off at 7.45pm (with the occasional exception of games in Russia and similar eastern countries), the new kick-off times will be 5.55pm and 8pm Irish time. On each matchday two games will kick off at the earlier time with the other six fixtures starting at 8pm. For instance, Tottenham’s trip to face Inter Milan is one of the earlier games on the opening day (Tuesday, September 18th) along with Barcelona’s clash against PSV Eindhoven at the Nou Camp.

Great, so I’ll be able to watch two games each evening if I can get home in time. So what Irish television channels will be showing them?

The recently launched Virgin Media 1 (the new name for TV3) will show one game on a Tuesday night with RTÉ also showing a game.

Virgin will show a 5.55pm game on their free-to-air channel with RTÉ broadcasting one of the later kick offs each Tuesday night.

On Wednesdays, however, it’s a bit different. Whereas previously TV3 and RTÉ split the evenings between them – meaning there was a free-to-air match each night – there is now no free game on a Wednesday in Ireland.

That’s because Virgin will show both a 5.55pm kick off and an 8pm kick off on Wednesdays on Virgin Media Sports – the company’s new subscription channel.

They will also have exclusive Irish rights to the Europa League on Thursday nights.

Alternatively, BT Sport continue to hold exclusive rights in the UK and will show every game live on Tuesdays and Wednesdays on their three channels and their red button service.

In Ireland the same package is available via eir sport.

So how much do I have to pay to watch these games?

Alternatively, if you are an eir broadband customer, you can get the BT Sport package for free.