Star-studded Parisians had been on the verge of another last eight defeat before late, late goals 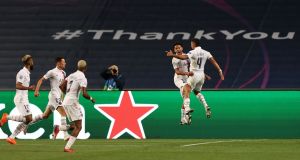 So much for the underdogs. On an extraordinary night in Lisbon Atalanta came within a minute of reaching the semi-finals of the Champions League, only to be pegged back right at the death by the superstars of Paris Saint-Germain, and then eliminated at the death in stoppage time.

For so much of this game Neymar had looked like drawing headlines for the chances missed in this 1-0 defeat, and for the sense of hubris as another year in Paris meets a dead end. This was a muted PSG team all round, with very little in the way of creativity or incision in midfield.

But it was Neymar’s spin that set up Choupo-Moting for an improbable winner in injury time, to turn this game on its head after Atlanta had led 1-0 until the 89th minute.

This was another unwanted new frontier in this year of sport on the run. For the first time in its history Uefa’s champions tournament staged a one-off quarter-final in a neutral stadium inside a masked and gloved plague-cordon.

There were small blessings. The Estadio Da Luz provided an agreeably haunting stage for the latest instalment of midsummer Covid-ball, vast open sides stretching up to the sky. And the late evening kick-off meant Lisbon was mercifully cool, or at least a step down from the predicted mid-August firepit.

For Atalanta the injured Pierluigi Gollini was replaced in goal by Marco Sportiello. Paris Saint-Germain were also diminished, lacking Angel Di Maria and Marco Verratti, and with some rustiness in key areas. Killian Mbappé looked a potent weapon against opponents who attack in such reckless numbers, but was only fit to take a spot on the bench.

And so the job of driving this PSG star-vehicle on fell to Neymar, the one remaining galactico in a relatively workmanlike eleven, albeit on a night when at times he appeared to be playing in a pair of wooden clogs.

The action was frantic from the start. It took Neymar two minutes to produce an astonishing miss, running in on goal unimpeded from the centre circle, then shanking the ball five yards wide of the right hand post.

Unconcerned by their own suicidally high defensive line, Atalanta set about besieging the PSG end.

With 10 minutes gone Hans Hateboer drew a clawing save from Keylor Navas, drifting in behind Juan Bernat to meet a diagonal pass from the chief conductor, Papu Gómez.

The game settled into a series of crisp, direct Atalanta attacks, broken up by the occasional white-shirted counter. Again Neymar was sent scampering in on goal, this time by a fine pass from Ander Herrera. The cross was a vague stab, not helped by Mauro Icardi’s sleepy movement.

For a while that powerful PSG midfield began to dictate its more stately rhythms. But it was Atalanta who took the lead. Duvan Zapata found some space just outside the box, tumbling over as the ball ran on to Mario Pasalic. His first time shot found the top corner.

The response was familiarly staccato. Neymar produced a nutmeg on Pasalic then pinged a shot just wide. Otherwise Atalanta held their high line, swarmed around the ball, combinations zippy and urgent where PSG seemed to be playing through a midsummer haze. Neymar had time before the break to miss another presentable chance, blasting miles over the bar after seizing on a terrible pass from Hateboer. As he limped down the tunnel for the half time break Thomas Tuchel looked more than a little spooked.

Tuchel has something pale and gaunt about him at the best of times, striding about on his touchline looking like a sad-eyed Victorian wraith. In Lisbon, left leg encased in a surgical boot, he could be seen shielding his brow and flinching in horror. Mbappé, his remaining ace, was sent out to warm up at the interval.

PSG began with more purpose after the break, albeit, these things are relative.Neymar continued to find space, but still lacked that razor edge. A low free-kick on 50 minutes was his fifth shot at goal, his fourth off target.

It was Atalanta who offered the more obvious threat. Pasalic shot wide after a goalmouth scramble, and every high set-piece threatened to find a hole in the PSG marking scheme.

With 31 minutes to play Mbappé was on, replacing Pablo Sarabia. His impact was instant, a series of surges down the left flank offering a threat where PSG had been reliant on Neymar’s twists and spins. Atalanta flooded that side, surrounding Mbappé with five defenders at times.

Finally Mbappé found space on the left, veered in on goal, but found himself crowded out just as it seemed certain the net would ripple. Atalanta hung on, right up until the death, when finally PSG found some relief. Chuopo-Moting, on as a sub, swung a fine cross into the box, and the ball was deflected in off a combination of an Atalanta defender and Marquinhos. Then came that remarkable finish, and pain for the underdogs from Bergamo. - Guardian