Composition of the board, as agreed per the State’s rescue package, still a live issue 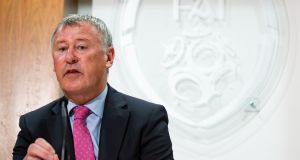 On a day that was intended to start easing tensions within the Irish football family, a dispute over whether directors approved the terms of the State’s rescue package has widened divisions ahead of Friday’s meeting of the full FAI senior council.

An emphasis on the doomsday consequences of reforms not receiving the sufficient two-thirds support at an EGM on August 31st was expected from Gary Owens during his press briefing on Wednesday. But the version supplied by the interim chief executive of events leading up to the deal being signed on January 30th provoked an angry rebuttal by the majority of directors on Wednesday night.

Given that elements of that memorandum of understanding (MoU) were relaxed on Wednesday and Owens noted delegates at an AGM in October could easily switch the casting vote into the hands of the president from the chairman, the status of the most fractious aspect will be tested by concerned council members from around the country descending on the Red Cow Hotel in Dublin.

That clause, whereby two of the eight directors elected through the FAI constituencies would have to relinquish their posts to facilitate an equal split with independents on the 12-person board, amounts to the cornerstone of the debate.

Or more pertinently, in a supposed climate of transparency in the post-John Delaney era, procedures about how it suddenly appeared on the MoU signed by new independent chairman Roy Barrett is developing into the issue at hand.

Owens had this to say on the sequence of events: “The process was quite fast at the end but the board members had the same opportunity to review what the terms and conditions of the MoU were and they signed off on it.

“It was approved beforehand, even I would say reluctantly approved.”

Not so, according to the football cohort. The group of eight said late on Wednesday night: “The elected directors of the FAI are alarmed at a statement made by Gary Owens. We wish to state on the record that they did not approve the MoU before it was signed and are calling on the interim CEO to immediately clarify his remarks.”

An email chain seen by The Irish Times appears to support their stance.

Following receipt of the draft MoU circulated to board members from the personal assistant of Goodbody Stockbrokers MD Barrett at 9.02am on the morning of January 30th, reaction was swift.

“I don’t believe we will be able to deliver on the amended corporate governance enhancements, the original review was an extremely hard sell,” replied Dick Shakespeare within the hour.

Dave Moran was next to issue a cautionary note: “Agree with Dick. Yes, the football family had to take some pain but six independent directors from 12 will be difficult to push through.”

Vice-President Paul Cooke concurred, stating: “Agree with Dick and Dave ... quick thought that it might be easier for the board increasing to 14.”

Last to unleash a warning was Joe O’Brien, representing the minority affiliates at the top table.

“As this is an MoU, do we have any room to manoeuvre? This document seems to be a collaboration of various “stakeholders” – all except the main one, ourselves.”

Just after lunchtime, Barrett emerged from the Department of Sport alongside then minister Shane Ross as a signatory to the MoU unchanged from the draft. A rancorous board meeting duly ensued the following week.

Those stakeholders O’Brien referred to – the State, Bank of Ireland and Uefa – were cited as the primary drivers of the reforms, both by Barrett in his letter to council members on Tuesday night and Owens yesterday.

Yet, rather than fully endorse the radical move of taking decision-making at boardroom level from democratically elected football directors, unprecedented in Irish sports bodies and football federations in the UK, Uefa and fellow umbrella organisation Fifa simply declare in the letter Barrett copied to council that an alternative option isn’t available in the FAI’s perilous state.

“The six and six board split change came from the government,” asserted Owens, attempting to explain why the endorsement by the State and Sport Ireland for introducing four independents last July became outdated within six months.

“The [Sport Ireland-commissioned] Kosi report which came out later in the year was a bit of a game-changer too. That showed serious governance and financial issues such as the role of the audit committee.

“We had to borrow €52.5 million and the people lending us the money determined the conditions. We were in an exceptional position – there was chaos and hysteria around.”

Only the MoU was clearly presented as not being legally binding.

That much was evidenced on Wednesday by the clause culling senior council members with more than 10 years of service being watered down.

Instead, even if they were part of Delaney’s inner sanctum at board and council level for several years, passing the “fit and proper” test administered by three independent lawyers will prolong their stay.

The necessity to avoid conflicts of interest is sure to get airing from the floor on Friday considering the bulk of nominees are drawn from clubs and affiliates, another backbone of the Governance Review Group (GRG) recommendations afforded the blessing last year of all those stakeholders Barrett and Owens signify as essential in the latest charm offensive.

Of course, chief operations officer Rea Walshe was part of that GRG. That was a few years after she became aware of the €100,000 loan Delaney gave to his employers in the FAI and before Sport Ireland learnt the solicitor had taken on paid legal work for the deposed chief executive.

“Rea was naïve, and she would accept she was naïve, in relation to the support she gave John [Delaney] in the past,” said Owens about reappointing Walshe last month.

Governance, and people’s interpretation of it, remains the watchword more than a year after Delaney’s departure.

1 Gordon D’Arcy: the next fear for Irish rugby is England in Twickenham
2 David Moyes discovered positive test an hour after arriving at London Stadium
3 Seán Moran: Fallout from Tyrone final celebrations will concern GAA
4 Pro14 teams need private planes to keep show on the road
5 How Dundalk’s opponents Sheriff started on the wrong side of the law
Real news has value SUBSCRIBE
Crossword Get access to over 6,000 interactive crosswords