Linfield handed a walkover after Drita placed in quarantine 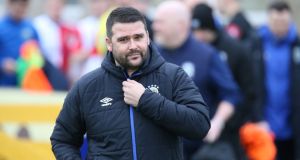 Linfield have been awarded a 3-0 win for their postponed Champions League preliminary round tie after Kosovan opponents FC Drita were placed into quarantine.

Two FC Drita players tested positive for Covid-19 just hours before Tuesday’s qualifying clash with Linfield, that was due to be staged in Swiss city Nyon.

Uefa postponed the tie, but have now handed Belfast side Linfield a walkover.

“In view of the whole team of FC Drita being put into quarantine after a second player of this team had tested positive for Covid-19, the UEFA Champions League preliminary round match could not be played,” a statement read.

“Given the urgent circumstances of the matter, the chairman of the control, ethics and disciplinary body referred the case to the appeals body.

“The chairman of the UEFA appeals body today declared the 2020/21 UEFA Champions League preliminary round match between FC Drita and Linfield FC forfeited by FC Drita, who is therefore deemed to have lost the match 3-0.”