Ole Gunnar Solskjaer: we are capable of another comeback

`We can do it, no doubt about it, we know we can carry a goal threat’ 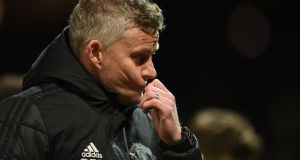 Ole Gunnar Solskjaer was frustrated with Manchester United’s first leg home defeat to Barcelona but insisted they are capable of another memorable comeback.

The Catalan giants did not deliver a vintage performance that has been their hallmark for over a decade but Luke Shaw’s own goal saw them leave Old Trafford boasting a 1-0 win after the first leg of the quarter-final.

United, who reached this stage by overturning a two-goal deficit against Paris St Germain at the Parc des Princes last month, saw Diogo Dalot and Marcus Rashford squander decent opportunities. Nevertheless the hosts did not have a single shot on target in the entire match.

And Solskjaer recognises they must do better in front of goal if they are to upset the odds once more in the return leg at the Nou Camp next Tuesday.

The ground holds a special place in Solskjaer’s heart after his goal there sealed United’s famous Treble almost 20 years ago, leading the Norwegian to say: “We’ve scored goals at the Nou Camp before from corners and crosses.

“Of course the PSG performance away gives us hope and belief that we can do it. But we know that we are playing against the favourites in the tournament.

“Going to the Nou Camp is going to be a challenge and it will be a greater achievement winning that one because with the history of Barcelona as well, they’re not used to losing at home.

“But we can do it, no doubt about it, we know we can carry a goal threat.

“We created a couple of very good opportunities, Rashy had a volley after a cross that got punched out, Diogo had a great chance at the back post.

“We have to take our chances, you have to be very, very effective and efficient over there. We know we’re not going to create loads of chances so we have to take the ones we get.”

United have only scored once in the Champions League at home this season, a statistic Solskjaer blanches at but one that he feels is unimportant for now.

He added: “We cannot defend not scoring goals at home. But away from home we’ve beaten Juventus, we’ve beaten PSG, we have to go to Barcelona and win that one.

“We know we have possibilities in this tie, now is not the time to think about our home performances because now we’ve got to look forward to Tuesday.”

Solskjaer thinks Barcelona were fortunate to finish with their full complement, with Sergio Busquets particularly fortunate to stay on the field following some robust challenges.

He said: “Definitely yes (Busquets should have been sent off). There’s nothing we can do about it. I can’t complain about the referee. We haven’t had any homers, if you put it that way.”

Barca’s only concern came in the first half when Lionel Messi, who was kept largely subdued, was unintentionally caught by a trailing arm from Chris Smalling. Messi played the entirety of the 90 minutes and Barca coach Ernesto Valverde revealed the Argentinian will be assessed on Thursday.

He said: “I feel good taking into account that we are going away with a decent result, (it leaves a) good taste in the mouth.

“We know it’s a tight result. There is a second game to come, we know they can react away from home and they did well against PSG.

“It was a very tough game, what we expected. There were moments where we suffered but we are happy.

“Messi felt very uncomfortable after the blow to the head, we’ll have to examine him tomorrow to see how he is, it was a strong blow, he has a large bruise.”

Midfielder Busquets added: “It was a big blow, he has a scar and he bled a lot, it was obviously uncomfortable for him but he put on a brave face and played as best as he could, as he always does.”

Barcelona defender Gerard Pique was also pleased with the result against his former club: “We put in an excellent performance defensively, we’re in our best form in defence of the season. The early goal relaxed us and we knew how to cope with the situation, the fact we didn’t concede helps us a lot,” Pique told reporters.

“It’s very difficult to come here, it’s an historical ground, there’s a sensational atmosphere and you get put under a lot of pressure.

“After seeing what they did against PSG there’s no reason at all to believe the tie is over. PSG were the clear favourites then, they played far better and look what happened. Anything can happen in football so we’ll have to focus very hard.”