Dundalk look to stay focused amid distractions and diversions 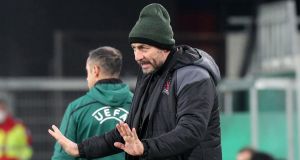 It is hard to know how much better Dundalk might be doing in this Europa League campaign if they had a completely clear run at it. But, much as it might be argued that they should be able to cope with them, there have been distractions, it seems, at every turn, and opportunities to get some points on the board are running out as they head into Thursday’s penultimate group game away to Molde (kick-off 8pm).

Elements of the league fixture list may have been foisted on them, and now there is Sunday’s cup final to consider in the run-up to this game. Some of the diversions on this occasion seem a little more self-inflicted, though, with Filippo Giovagnoli having to explain on Wednesday how the club had come to be fined €50,000 by Uefa for “shadow coaching” and Shane Keegan dismissing the notion that the players might be distracted by increasingly rampant speculation that about half of them will be leaving in a couple of weeks’ time.

The Italian, in truth, mounted a meagre enough defence of the misunderstandings that led to the charge against the club by Uefa. He does, as everyone knows, not hold the pro licence required to manage at this, or indeed, League of Ireland level and perhaps it is the FAI’s relatively laid-back attitude with regard to the issue that persuaded him that European federation might also look the other way.

Having gone to the stand in Tallaght during the first Molde game after having been warned that he might be reported and “have some problems”, however, Giovagnoli seems to have found a match delegate who was less explicit at Arsenal, “so I stayed in the dugout. With Rapid, I stayed the same.

“If there was some doubt, now we understand really well,” continues the coach, who has just turned 50. “They made us understand.” It is something of a wonder that they had even to try.

The Italian’s criticism of the scale of the fine when compared with some of those historically doled out to clubs after incidents of racism in their grounds has some merit, although Uefa have increasingly used partial or complete stadium closures to punish the latter offence, and the sum involved here is tiny really by comparison with the prize money on offer in the competition, even if it is enormous by Irish standards.

Keegan, meanwhile, insisted that the spirit around the camp remains very good despite various reports that the likes of Dane Massey, Daniel Kelly, Michael Duffy and Sean Gannon are all set to depart.

Everyone bar Pat Hoban, in any case, is available for a game against opponents who were well beaten themselves in both group games against Arsenal, but who come into this fixture looking to maintain the advantage they currently hold over Rapid Vienna in the race to progress with the Londoners to the knockout stages.

They have won four and drawn one of the five league games they have played since the trip to Tallaght, scoring 13 times in the process but managing just one clean sheet, something that suggests that we may well be in for another open encounter.

“We expect a very, very tough game for sure,” says Keegan. “They are arguably in a lot better form this time than they were coming into the previous one, but we have to take heart from two-thirds of our performance in the home game.

“I thought we were probably the better side in the first half and deservedly had that lead, but, to be fair to them, when they really turned the screw on us, we couldn’t get out of our half. You have to respect them, they are a serious side, but at the same time we have to fully believe we can go and do something.”