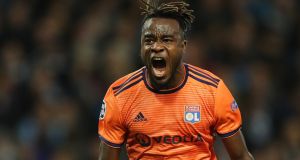 Pep Guardiola confessed before this game to becoming frustrated at Manchester City’s inability to do the simple things well. He will be closer to furious now that his side have lost ground in the Champions League with their most inept performance of the season, the English champions being made to look amateurish at times by the side that finished third in Ligue 1 last season.

Lyon were actually quite good, despite a poor run of domestic form, but with Guardiola taking a turn at being a spectator City were short of ideas and leadership on the pitch.

The manager had to take a back seat , a Uefa suspension as a result of haranguing officials in the defeat by Liverpool last season. He has recently complained of being angry when he sees players repeatedly choosing the wrong options and this display will not have calmed him down much, however far he was from the action.

City’s problem in recent weeks has usually been in front of goal; opponents have been dominated but not put to the sword. A selfish decision here, a poorly hit pass there, all add up to a lack of ruthlessness in finishing that Guardiola feels will cost his side against experienced opponents in the latter stages of the Champions League.

Lyon are not exactly that, but any hopes City might have had of a gentle opening against a side struggling for results in the French league were dashed when the home side went behind after an uncharacteristically slapdash first half-hour.

Watching from the stands, Guardiola must have felt like pulling the brim of his flat cap lower and lower as he surveyed one mistake after another. This time City were not just wasteful in the opposition penalty area, they were guilty of errors all over the pitch. David Silva giving the ball away on the edge of his own area then crashing into Fabian Delph in his efforts to retrieve it; Kyle Walker passing the ball straight to Houssem Aouar; Aymeric Laporte being turned by Memphis Depay – these are all sights to which Manchester City coaches are no longer unaccustomed.

To the joint disbelief of Guardiola in the stand and Mikel Arteta on the touchline, 26 minutes of inept football were capped by an absolute gift of a goal to offer the visitors the encouragement they barely deserved. First, Fernandinho gave the ball away on halfway with City in attack mode, inviting Nabil Fekir to exploit the space that would normally have been filled by Walker.

The Lyon captain duly skipped away to send over a cross from the left, yet it was poorly directed and gave Delph every chance to clear. One air shot later the City left back had missed his opportunity to connect with the ball and could only watch as Maxwel Cornet gathered the cross behind him and slipped a low shot into Ederson’s bottom-right corner.

Ilkay Gündogan had a goal disallowed for a tight offside against Raheem Sterling as City tried to claw their way back into the game and Gabriel Jesus protested vigorously that he should have had a penalty when he appeared to go over Rafael’s knee, but before Arteta had the chance to get angry himself at half-time his side had slipped further behind.

Fernandinho again lost the ball on halfway, this time less culpably than before after receiving the ball under pressure, and Fekir ran directly for goal and held off John Stones to score. No wonder Liverpool were so interested in the 25-year-old’s signature. The French striker can certainly make the most of limited opportunities.

So can Sergio Agüero and City undoubtedly missed their injured line leader, though Jesus is not a bad replacement. It was the lack of clear-cut opportunities that surprised in a lacklustre first half. To use a favourite Guardiola expression, City were simply not arriving as often as they have been doing.

The second half predictably began with chants of Agüero’s name from the crowd, though the Argentinian stayed on the bench and it was Fernandinho who saw the first shot roll wide. Jesus supplied a second, well saved by Anthony Lopes, before Leroy Sané was sent on to provide some much needed pace and penetration.

City remained stubbornly pedestrian, and should have gone three down when Fekir expertly picked up Depay’s run through the middle after an hour. The ball was played right into the former Manchester United player’s path and Depay did well to find the burst of speed to hold off Walker, but his well-struck shot came back off an upright.

That was enough to bring the introduction of Agüero, sore ankle or not, though it was Sané who began the fightback, darting to the byline on the left and cutting back for Bernardo Silva to reduce the deficit.

Agüero’s first shot, on 72 minutes, was on target, but Lopes got down well to save. When Walker put a free kick in a promising position high over the Lyon bar in the closing minutes it seemed to sum up City’s night. - Guardian service

1 Wexford best the weather and Kilkenny on a mad day to be hurling
2 On healing and wild hurling: The re-education of Diarmuid Lyng
3 ‘Your father works for my father’: Schools rugby turning toxic in the stands
4 Few, if any, have given as much to Munster as Garrett Fitzgerald
5 Winning Triple Crowns: ‘Seeing Jack Kyle was a spiritual experience’
Real news has value SUBSCRIBE