Liverpool coast past Maribor to go top of Group E 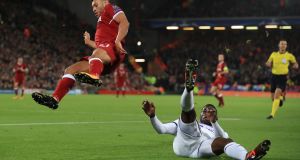 Jürgen Klopp can add fortune-telling to his list of talents. The Liverpool manager predicted the 3-0 defeat of Huddersfield Town on Saturday would be perfect preparation for their Champions League return with Maribor and so it proved with unerring accuracy. Maribor restored some pride after their 7-0 destruction at home while Liverpool strengthened their claims on the knock-out phase.

There was no rout this time, but there was also no doubting a Liverpool victory from the moment Mohamed Salah opened the scoring against the champions of Slovenia. Emre Can and Daniel Sturridge also struck as Liverpool matched Saturday’s scoreline after a goalless first half and also missed a penalty to repeat the tale of Saturday’s win against David Wagner’s side. Liverpool will qualify from the group with victory in Sevilla this month, although they will have to be the first team to win there in more than a year to do so.

Liverpool endured an early setback when Georginio Wijnaldum appeared to twist his right ankle while closing down a Maribor midfielder. Klopp’s attempt to rest Jordan Henderson lasted all of 17 minutes as the captain was summoned to replace the Holland international.

There was an immediate blow for the Liverpool crowd, too. Darko Milanic, the Maribor coach, set the visitors up with nine outfield players behind the ball in a clear damage-limitation exercise. There was to be no repeat of the disorganised display that exposed Maribor’s defence to the Liverpool press and humiliation two weeks ago, the one-time Leeds United coach had decreed. It made for another episode of attack-versus-defence at Anfield and test of Liverpool’s patience.

Liverpool again dominated the Slovenian champions but without the clinical touch that delivered the biggest away win in the club’s rich European history when they last met. With space restricted and Maribor’s defence showing greater concentration, the home side’s most productive outlet was Trent Alexander-Arnold and his crosses from the right wing. Salah, twice, Can and Roberto Firmino were unable to capitalise on inviting deliveries from the young full-back before the interval. Alexander-Arnold’s cross for Firmino almost produced the breakthrough with the ball deflecting off the thigh of the defender Jean-Claude Billong towards his own goal. Jasmin Handanovic, the visiting goalkeeper, produced a superb save to claw the ball on to his crossbar and to safety.

In stark contrast to the game in Slovenia it proved an unproductive first half for Liverpool’s forward line, one that included Alex Oxlade-Chamberlain, making only his second start for the club since his £40m arrival from Arsenal on deadline day.

Klopp had devoted a chunk of his programme notes to Oxlade-Chamberlain’s 24-minute substitute appearance against Huddersfield, praising the summer signing’s “highest quality” and noting, interestingly, that “sometimes I think he is the last to realise this”. He was denied an early opportunity by an immaculate challenge from the Maribor defender Aleksander Rajcevic but, d eployed on the left of the attack, the England international struggled to justify his inclusion ahead of Daniel Sturridge. Maribor departed to a roar of approval from their fans with the game goalless at half-time.

Their defiance was short-lived. Similarly to Huddersfield at the weekend, Liverpool’s movement and passing was much sharper from the start of the second half and they were quickly rewarded with a much-needed breakthrough. A right-wing cross from Alexander-Arnold was unsurprisingly key. The 19-year-old took Joël Matip’s pass in his stride and picked out Salah’s run across the penalty area with a low, measured delivery. Salah steered the ball beyond Handanovic with a deft finish for the 10th goal of his short Liverpool career. And to think he could have doubled that tally with a touch more composure.

A second should have arrived from the penalty spot moments later when Firmino embarrassed Rajcevic with an exquisite flick, prompting the Maribor defender to drag him to the ground as he cut along the by-line. James Milner was handed penalty duties after Salah’s miss on Saturday but suffered the same fate as the Egypt international. Handanovic produced another superb save to tip the midfielder’s precise effort on to a post and out. It was Liverpool’s fourth consecutive penalty miss at Anfield.

Maribor’s keeper also denied Firmino at close range and was a bystander when Salah headed wastefully over from Alberto Moreno’s perfect cross, though a Liverpool victory was not in doubt after the opener. Can secured the three points with a polished second. Cutting across midfield, the Germany international played a slick one-two with Milner before stroking a first-time finish into the bottom corner from the edge of the penalty area. It fell to the substitute Sturridge to complete the scoring when he collected Moreno’s cross while Maribor slept at a short corner and fired beneath Handanovic from close range. – Guardian service