Champions League: All you need to know ahead of the last 16 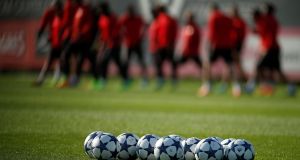 The Champions League resumes on Tuesday with 16 teams now vying for a place in the final at Cardiff’s Principality Stadium on June 3rd.

The second round first legs will take place over this week and next week before a break of a week and then the second legs in the first two weeks of March.

The quarter-final draw will then take place on March 17th and is the first stage where teams from the same country can play each other.

With three English teams left in the competition, here is your team-by-team guide to the last 16.

Overview: Arsene Wenger’s side qualified easily from a straightforward group, beating both Ludogorets and Basle twice and drawing both matches with Paris St Germain to finish top ahead of the French champions, but have fallen off the title pace domestically as speculation continues around the future of Wenger plus star duo Alexis Sanchez and Mesut Ozil.

Strengths: With Sanchez and Ozil, the Gunners have plenty of creativity and the ability to unlock most defences.

Weaknesses: Arsenal lack leaders and players prepared to grab games by the scruff of the neck.

Weaknesses: Their transfer ban has prevented Diego Simeone strengthening his squad and the mental scars of losing two Champions League finals in three years to rivals Real are likely to run deep.

Strengths: Lionel Messi, the competition’s top scorer with 10, is an obvious one and, with the Argentinian joined in attack by Neymar and Luis Suarez, plenty of goals is another. The Catalan club are perhaps also one of the few teams remaining who other sides will genuinely fear playing.

Weaknesses: Luis Enrique’s team still look vulnerable at the back. Javier Mascherano and Samuel Umtiti definitely have frailties and they could be exposed by Europe’s top clubs.

Strengths: Roger Schmidt’s side demonstrated their organisation and resilience by remaining unbeaten in the group stage.

Weaknesses: Inconsistent form has left them mid-table in the Bundesliga. They could lack the necessary firepower to progress, although striker Javier Hernandez — until recently without a league goal since October 1 — has now netted three goals in his last two games.

Overview: Following defeats to FC Rostov and Atletico Madrid, Carlo Ancelotti’s side had to settle for second spot in Group D behind the Spanish club.

Strengths: Refreshed from the four-week German winter break, Bayern have a team packed with quality and experience, with prolific Poland international Robert Lewandowski leading the line.

Weaknesses: Very few, although should anything happen to Lewandowski and Arjen Robben then the goals could dry up.

Overview: Rui Vitoria’s men scraped into the knockout stage, finishing a point ahead of Turkish side Besiktas.

Strengths: Brazilian forward Jonas has been among the goals since returning from injury, while other key players such as defenders Jardel and Grimaldo should soon be back in action.

Weaknesses: The Eagles have lacked a prolific goalscorer this season and managed just three strikes in front of their own fans in the group stage.

Overview: Dortmund may be off the pace in the Bundesliga but they impressively finished ahead of Real Madrid to top Group F.

Weaknesses: Thomas Tuchel’s men, who will surely fancy their chances against Benfica, have no problem finding the net but their fluid style can leave them exposed at the other end.

Overview: Juventus, who are well placed for a sixth straight Serie A title, won all three away games on their way to topping Group H ahead of Sevilla.

Strengths: The Bianconeri’s formidable defensive line is packed with ability, leadership and experience, backed up by one of the best goalkeepers of the last 20 years, Gianluigi Buffon. In Gonzalo Higuain and Paulo Dybala, they also have plenty of goal threat.

Weaknesses: With Paul Pogba, Arturo Vidal and Andrea Pirlo all gone, Juve’s midfield is not what it once was, although Massimiliano Allegri has worked hard to turn it into a dynamic unit.

Overview: The Foxes convincingly progressed to the knockout stage, topping Group B after winning four and drawing one of their opening five matches to ensure qualification before a second string was thrashed 5-0 at Porto.

Strengths: Unlike some of the bigger teams left in the competition, very little is expected of Leicester and they do not have much to lose. Some of their under-performing players may also see Europe as the perfect place to showcase their skills and catch the eye of clubs across the continent.

Weaknesses: Their dreadful Premier League form must surely have impacted on morale, while a lack of top-class players, shortage of Champions League experience and rumours of rifts between manager Claudio Ranieri and some of his star men will not help their cause.

Overview: City’s home form was key to them seeing off Borussia Monchengladbach and Celtic to finish second behind Barcelona in Group C.

Strengths: Experienced midfielder Yaya Toure is back in favour and included in City’s European squad, while David Silva and Kevin De Bruyne possess the guile to unlock most defences.

Weaknesses: Manager Pep Guardiola’s tendency to leave striker Sergio Aguero on the bench is seen by many as a waste, while City’s defence continues to look shaky.

Overview: Leonardo Jardim’s men are mounting a genuine challenge for a first French title since 2000 and they were impressive in the group stage, topping Group E ahead of Bayer Leverkusen and Tottenham.

Strengths: The resurgence of Radamel Falcao has played a big part in Monaco’s league form, with the Colombian having already scored more this campaign than in the last three years combined.

Weaknesses: The once big-spending Ligue 1 club have cut back and now have a distinct lack of genuine superstars, relying more on youth talent and lesser-known squad players.

Overview: The Italian club’s away form was crucial in them topping Group B as they won at Benfica and Dynamo Kiev and drew with Besiktas.

Weaknesses: Maurizio Sarri’s men seem to lack the belief — and possibly enough quality players — to challenge for major silverware. The Naples club have won two Italian cups in the last five seasons but they have fallen well short of champions Juventus in those campaigns.

Overview: The Ligue 1 champions had little trouble progressing to the knockout stage, although they had to settle for second place in Group A after a draw against Bulgarian side Ludogorets left them behind Arsenal.

Weaknesses: PSG have dominated French football in recent years but are games against the likes of Dijon, Rennes and Nancy sufficient preparation for Messi and co?

Overview: Winners under Jose Mourinho in 2004, Porto advanced to the last 16 behind English champions Leicester.

Strengths: Portugal international Andre Silva has bagged 16 goals for an in-form team which has lost only twice all term.

Weaknesses: The Portuguese club have the youngest squad of the 16 remaining teams and could be short of the necessary European experience.

Overview: Although they were never in any danger of being eliminated, Real surprisingly finished second to Borussia Dortmund in the group stage after drawing twice with the Bundesliga side and once with Polish champions Legia Warsaw.

Strengths: Having won the trophy in two of the last three seasons, Real possess the experience to do it again. The goals of the competition’s all-time top goalscorer Cristiano Ronaldo will also help their cause significantly.

Weaknesses: They perhaps rely too heavily on Ronaldo and also have a history of disciplinary problems, particularly influential defender Sergio Ramos who has been sent off 21 times in his Real career and regularly picks up cautions.

Overview: Jorge Sampaoli’s men remain in LaLiga’s title race and progressed to the last 16 behind Juventus in Group H.

Strengths: Sevilla have experienced plenty of European success, albeit in the Europa League which they won in each of the last three seasons, and will fancy their chances of seeing off Leicester.

Weaknesses: Their recent European record is excellent but do they possess the players to step up and challenge the big boys in Europe’s premier club competition?

Who can I watch on TV?

BT Sport will broadcast every game on their red button service with PSG v Barcelona the main game on BT Sport 2 tomorrow.

You can also watch that game on TV3 while Benfica v Borussia Dortmund will be shown on eirSport 1 and BT Sport 3.

On Wednesday RTÉ2 and BT Sport 2 will show Bayern Munich and Arsenal while Real Madrid v Napoli will be on eirSport 1 and BT Sport 3.