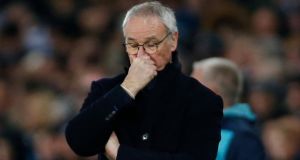 Claudio Ranier’s Leicester are now just one point above the relegation zone after they were beaten 2-0 at Swansea. Photograph: Reuters/Paul Childs

There is no respite for Claudio Ranieri and his Leicester City players. The Italian has the “unwavering support” of his board but there was no sign of a positive response from his team on the pitch as Leicester suffered a fifth successive league defeat – something that has not happened to the reigning champions in England since 1956.

Other statistics are every bit as a troubling, including the fact that they remain without a league goal this year and have yet to win away from home in the top flight this season. Leicester, in short, look like relegation material and it must have been a chastening afternoon for the club’s owner, Vichai Srivaddhanaprabha, who witnessed another abject performance.

Swansea City, in contrast, could not be happier. Paul Clement marched on to the pitch at the final whistle and savoured the moment as he punched the air.

He has re-energised this club since taking over as manager at the start of January and it is remarkable to see the turnaround.

This was a fourth win in six league matches and lifts Swansea above Leicester and up to 15th in the table, four points clear of the relegation zone. Alfie Mawson, who was outstanding throughout, opened the scoring with an exquisite volley and Martin Olsson added the second in first-half injury-time.

With Leicester sitting deep and Swansea patiently probing without creating too much in the early stages, the game was a slow-burner, so much so that we had to wait 34 minutes before either side registered a shot on goal. Yet everything fell into place for Swansea just before the break as they struck twice with two superb goals that exposed Leicester’s fragile confidence.

Mawson got the first and it was a beauty. Robert Huth’s clearance from Gylfi Sigurdsson’s free-kick lacked distance and Federico Fernández headed back across goal to his central defensive partner, who showed wonderful technique to thump a first-time waist-high volley from 12 yards beyond Kasper Schmeichel.

Swansea’s second arrived six minutes later following a lovely four-man move that started with Tom Carroll finding Fernando Llorente deep inside the Leicester half. The Spaniard, so adept with his back to goal, neatly released Sigurdsson and then came the killer first-time pass from the Icelander that set Olsson free. Running in behind Danny Simpson, Olsson drilled a left-footed shot that beat Schmeichel at his near post.

Ranieri reacted by making two changes at the interval and changing a system that started as 4-4-1-1 – Demarai Gray and Riyad Mahrez took it in turns to play in the hole – to a more conventional 4-4-2, with Islam Slimani joining Jamie Vardy in attack and Ben Chilwell replacing Christian Fuchs at left-back.

Slimani could, and possibly should, have pulled a goal back for Leicester in the 63rd minute. Mahrez, drifting infield, picked up the ball 30 yards from goal and released Slimani in behind Mawson. One-on-one with Fabianski, Slimani saw his low left-footed shot smothered. It was a big opportunity to waste.

With Swansea seemingly content to protect their lead, Leicester were seeing more of the ball in the second half, yet there was so little conviction about their attacking. Slimani set up Vardy with 12 minutes remaining but the England international’s shot from the edge of the area flashed high and wide. It kind of summed up Leicester’s day.