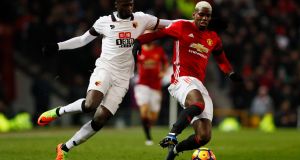 Manchester United’s Paul Pogba and Watford’s M’Baye Niang. Against Watford it was Anthony Martial who occupied the fourth forward’s role, the one that did not exist when Pogba was the third central midfielder. Photograph: Reuters/Jason Cairnduff

Sometimes when José Mourinho crowbars a comment into an answer it is because he can seem an incorrigible mischief-maker, forever ready to take a sly dig at a rival. At others, he is less provocative, but more instructive. So it was when he was asked about Manchester United’s fourth consecutive clean sheet.

After praising his defence, he took a detour to cite Paul Pogba’s influence. “He is playing with great balance in these last two games: he is playing with his brain, he is recovering a lot of balls, he is very good in his positional play,” Mourinho said.

Pogba tends to receive more compliments for his talent but tactical discipline is a trait Mourinho values. Perhaps it will enable a less flamboyant, more dependable Pogba to afford United another option.

If the world’s most expensive footballer has represented an enigma, offering ability if not reliability, a more restrained, more responsible Pogba had a supporting role in a dominant display against Watford.

He can be explosive, as a couple of surges forward showed, but more often than not he was the metronome, the player with the most touches and the most passes. He did so with a single central-midfield ally in Ander Herrera.

Pogba had cost £89 million without proving conclusively he can play in a pair. Whether for United, Juventus or France, he has often been at his best on the left of a midfield trio.

It appeared to persuade Mourinho he needed the insurance policy of two other central midfielders. November brought a recall for Michael Carrick, a seemingly transformative move. Yet while the vice-captain remains unbeaten in this season’s Premier League, Carrick has begun only three of United’s past seven games. His two most recent league appearances have been curtailed at half time. On both occasions he made way for a more progressive player in a change of shape.

A constant for a decade had seemed a catalyst. Yet he can also look like a transitional choice, adding solidity before Mourinho was willing to commit to a bolder system. Now the switch back from 4-3-3 to 4-2-3-1 seems to have begun. A more defensive Pogba can render United more attacking. He allows Mourinho to select a front four.

With Pogba occupying a deeper berth, Mourinho can also field a specialist number 10. As such, Henrikh Mkhitaryan was the outstanding individual at Leicester. Perhaps that position will be reserved for Antoine Griezmann next season.

If Pogba permits Mourinho to field another flair player, it serves his purposes. Another of his telling unprompted utterances was a reference to United’s tradition of entertaining football.

If Wayne Rooney was the first of United’s elder statesmen to find his position redundant because of Pogba, after the autumn change of thought, Carrick has become the latest. Mourinho has been ambivalent regarding whether the veteran, who is out of contract in a summer when he will turn 36, will be granted an extension. If the theory was that Pogba could not operate in a duo, Carrick’s immobility may mean the same is said of him. The more athletic Herrera is better suited to being Pogba’s solitary sidekick.

Yet the signs are that, against lesser sides, Mourinho feels Pogba’s growing sense of maturity allows him to play 4-2-3-1. If an £89 million outlay was supposed to bring in a difference maker, perhaps it has; just in a more understated way than envisaged.