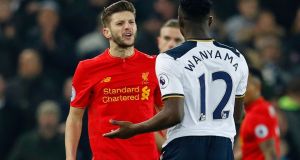 Pinning blame on players may be justified, tempting and good for self-esteem but can come at a price for managers who succumb. “That is killing for a team,” said the Dutch midfielder Georginio Wijnaldum. Liverpool repaid Jürgen Klopp for his refusal to give the last rites before Saturday’s comfortable defeat of Tottenham Hotspur was under way.

At Melwood last week, while Klopp was continuing to take responsibility for Liverpool’s 2017 slump, the captain, Jordan Henderson, called a team meeting without the manager’s knowledge. The anaemic display at Hull City was the signal for some home truths, with Champions League qualification in danger of joining the Premier League title, the FA Cup and the EFL Cup on Liverpool’s list of unfulfilled targets. The release of anger and return to form that shattered Spurs’ 11-game unbeaten run reflected an acceptance that blame did not rest with Klopp alone.

As Adam Lallana said: “It was up to us to respond. The manager can say as much as he likes and tell us what he wants us to do and what attitude he wants us to have, but we have to do it. The result was great but so was the performance. We started on fire and it could have been three or four at half-time. It was something that we knew we had to do.”

Lallana missed several days’ training in the buildup with injury but was among many in red to produce a vastly improved individual display in Liverpool’s first league win of 2017.

Sadio Mané’s two goals in three minutes reaffirmed his importance, while the exquisite touches and passing of Roberto Firmino, Henderson’s and Wijnaldum’s aggression in an ill-tempered game, Lucas Leiva’s dominance of Harry Kane, and Simon Mignolet’s timely save from Son Heung-min underpinned a fine collective response.

Mauricio Pochettino admitted his team struggled to compete with Liverpool’s tempo and aggression but his high line, and the aimless long balls that littered Spurs’ second-half performance, were a baffling, ineffective approach against Klopp’s system.

“Big credit to Jordan, he wanted the team meeting to happen and got everyone together,” Lallana said. “It wasn’t just him who spoke. The senior players spoke, the non-senior players, everyone. It was good, it was refreshing. It was just in the dressing room at Melwood. Every now and again it doesn’t hurt to speak about it. Sometimes if anyone has anything to say, as long as it is not personal, just purely professional, there is no harm in reminding each other of what we need to do. You could see everyone was fighting for each other.

“It was a very open meeting and I came out of it knowing every one of those players are together and intent on turning things around as quickly as possible. Almost an ‘us against the world’ type of attitude and we will do anything for each other, work our socks off. We knew things would change, it was just a matter of time.”

Klopp cited Hull as another example of Liverpool’s unerring ability to create their own problems. Saturday provided another example of their ability to dictate games against leading Premier League teams, albeit with the help of two early goals and poor defending from players such as Eric Dier and Ben Davies.

Wijnaldum believes the Liverpool manager’s handling of the downturn was responsible for the recovery, one Klopp hopes will be sustained with five days’ training in La Manga this week.

The Holland midfielder said: “It was really important the manager believed in us because if a manager says the same as the critics in the situation we were in that is killing for a team. It would kill the confidence of the players.

“When you are a team you have to believe in each other, you are a kind of family and if one of yours says: ‘You’re not good enough’ or what the media has been saying, that is not a good thing. He believes in us . . . That gave us a good feeling.”

Mané epitomised the appetite throughout the team, starting his run for the opening goal as soon as possession was won in midfield and snapping into the ponderous Dier to break clear for the second.

But Wijnaldum cautioned: “Last week we lost with Sadio Mané. I don’t think it is fair to the other players to say: ‘Because of Sadio Mané we win.’ Of course he is a great player – he helps us with his speed and he scores goals – but I think it is more about the team.”