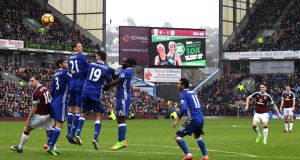 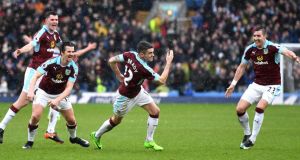 Republic of Ireland international Brady, a €15 million deadline-day signing from Norwich, curled a home a superb 20-yard free-kick to cancel out Pedro’s early opener for Chelsea.

He said: “Really? What’s that all about? You see they didn’t know that we’d been working on that all week. Thank you!

“I didn’t know that, but it was a sublime free-kick against a top-class goalkeeper, who is a giant of a man. To find the area of the goal that he needed to was fantastic.”

Meanwhile Brady wasn’t pleased with his performance despite earning his side a big point, he said: “I’m lucky it went in because I didn’t have the best of games.”

Chelsea had won 16 of their previous 18 league games heading into the fixture, while Dyche’s Clarets were chasing a sixth straight home league win and their eighth in all competitions.

Burnley, yet to win on the road in the league this season, have steered clear of relegation trouble following promotion due to their formidable home form.

Although Chelsea finished the game stronger, Antonio Conte’s side did not deserve to become only the fourth side to triumph at Turf Moor this season and the first since Manchester City in November.

Eden Hazard forced Tom Heaton to save low down to his right in the opening exchanges and it came as no surprise when Chelsea, unchanged from last week’s home win against Arsenal, opened the scoring in the seventh minute.

Victor Moses drifted in from the right and threaded a pin-point pass down the middle for Pedro to run into the penalty area unopposed and slide the ball into Heaton’s bottom right-hand corner.

Burnley, for whom another deadline-day signing, Ashley Westwood, also made his full debut, responded through Ashley Barnes, but the striker was off balance and his shot barely troubled Thibaut Cortois.

The home side went closer in the 20th minute – George Boyd and Barnes combined on the edge of the area and the latter’s effort flew two yards wide – before a moment of individual brilliance from Brady hauled them level in the 24th minute.

Nemanja Matic was penalised by referee Kevin Friend for his foul on Joey Barton 20 yards from goal and Brady curled an inch-perfect left-footed free-kick beyond Courtois into the goalkeeper’s top right-hand corner.

Burnley had really warmed to the task by now after seeing out Chelsea’s early onslaught and right back Matt Lowton was denied his side’s second as a sprawling Courtois saved with his legs.

Chelsea were spared by another Courtois save at the start of the second period. Both Gary Cahill and David Luiz inexplicably failed to cut out Barnes’s diagonal pass into the area and Andre Gray raced on to the ball, but his low drive was gathered by the diving goalkeeper.

The visitors enjoyed more sustained pressure as Diego Costa was crowded out in the box, but Burnley continued to carry a threat and Luiz’s desperate lunge diverted Gray’s dangerous cross.

Cesar Azpilicueta’s 30-yard drive had Heaton back-pedalling as it whistled over the crossbar just after the hour-mark and Burnley’s new hero Brady was given a rousing send off when replaced by Scott Arfield with 25 minutes to go.

Hazard rushed at a half-chance and curled a shot off target and substitute Cesc Fabregas, on for Matic, miscued from the edge of the area as Chelsea went in search of the winner.

Burnley’s threat going forward diminished as the game headed into the final 10 minutes and Arfield slipped as he fashioned to shoot in the box.

Pedro spurned a half-chance when he was played in by Fabregas on the left side of the area but although home fans groaned when four minutes of added time were announced, Chelsea failed to muster another clear-cut chance and Burnley held out for an impressive point.

1 Golf in Level 5 Covid restrictions: Clubs still waiting to hear if they can remain open
2 Johnny Sexton: ‘It hurts more when you are captain’
3 2020 All-Ireland Senior Hurling Championship key dates
4 On healing and wild hurling: The re-education of Diarmuid Lyng
5 The Offload: Spectre of doping hangs heavy over South African rugby
Real news has value SUBSCRIBE