Liverpool escape to victory at Leicester 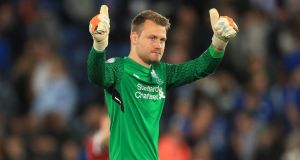 Simon Mignolet saved Jamie Vardy’s penalty to clinch a thrilling 3-2 win for Liverpool at Leicester. The goalkeeper capped an eventful game after conceding the spot-kick having also been in the spotlight for Shinji Okazaki’s controversial strike.

Mignolet appeared to be held by the forward when he netted just before the break after Leicester trailed to goals from Mohamed Salah and Philippe Coutinho. Jordan Henderson made it 3-1 before Vardy netted but he was then denied from the spot by Mignolet.

It was revenge for Liverpool after they lost 2-0 at the King Power Stadium in the Carabao Cup on Tuesday and they ended a run of four games without a win to move fifth. Boss Jurgen Klopp will surely still be concerned with their defence - Reds have now conceded nine or more goals in their opening three games on the road for the first time since 1965.

Leicester have their own concerns after just one win in their opening six games leaves them 16th.

Early on, Okazaki sent Vardy scampering down the left and when Mignolet saved his effort, Riyad Mahrez could only direct the rebound over from six yards. The Reds had been wasteful on Tuesday and Salah continued that trend when he missed a glorious chance, shooting wide from 12 yards after Emre Can’s strike thumped the base of the post.

Liverpool and Salah did not have to wait long, though, as the opener came on 15 minutes when Coutinho swung in a deep cross and Salah’s far-post header beat Kasper Schmeichel. It was the goal Liverpool desperately craved on Tuesday and they doubled their lead eight minutes later through Coutinho.

The Brazilian was missed when he was substituted in mid-week and reminded the Reds of his importance when Wilfred Ndidi fouled Alberto Moreno and Coutinho curled the free-kick in from 25 yards.

Had Okazaki scored one of his two chances - a header before Salah’s opener and a snapshot following a poor Mignolet clearance - a leaky Liverpool defence may have crumbled. Instead, the Foxes were chasing the game after less than half an hour, even more so when Okazaki’s effort was ruled out for offside after 38 minutes.

But the Japan international grabbed Leicester a controversial lifeline in first-half stoppage time to pull a goal back. Mignolet had turned Vardy’s header over for a corner and when it was swung in, Okazaki bundled over the line from a yard after the ball had struck Harry Maguire.

Liverpool were furious as Okazaki was clearly fouling Mignolet when the corner came in but referee referee Anthony Taylor failed to spot it.

With the game’s complexion changed Leicester upped the tempo, which unsettled the visitors, but failed to create a clear chance until a quickfire goal rush. First, the Foxes’ attacking enthusiasm got the better of them on 68 minutes when Maguire lost possession inside Liverpool’s half and substitute Daniel Sturridge scampered clear to tee up Henderson to score.

Yet Liverpool’s soft defence continued to undermine their attacking excellence and Vardy pulled a goal back just one minute and 29 seconds later, heading in after Mignolet parried Demarai Gray’s strike. Tails up, Leicester hunted the equaliser and it should have come when they earned a 73rd-minute penalty.

Again it was Mignolet in the spotlight when he missed a clearance and clattered into Vardy but he redeemed himself when he beat away the England striker’s spot kick. The goalkeeper has saved seven of the 15 Premier League penalties he has faced since joining Liverpool and earned them victory.