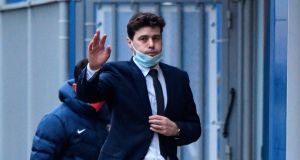 Mauricio Pochettino has left open the possibility of Lionel Messi joining him at Paris Saint-Germain by saying “any big player in the world is welcome”.

At his first press conference as PSG manager, Pochettino was asked whether he would speak to his fellow Argentinian this month about moving to France next summer when the player’s contract at Barcelona is due to expire.

Rumours of such a move have long been in circulation, and Pochettino did not quash them.

“To be honest we are not talking about that,” said Pochettino on Tuesday, three days after confirmation of his appointment. “We have just arrived and it’s been a crazy period, trying to adapt to a new club. We’ve had lots of meetings, training sessions and are preparing for a game [at Saint-Etienne on Wednesday]. For sure we are going to have time to talk about everything. At Paris Saint-Germain any big player in the world is, I think, welcome.”

At an unveiling in which he revealed little, Pochettino, who spent two years at PSG as a player, spoke in Spanish and English but avoided answering questions about transfer bids for Dele Alli or Christian Eriksen, with whom he enjoyed working with at Tottenham Hotspur.

But he made no effort to mask his excitement at taking charge of PSG, his first job since leaving Spurs in November 2019. “Father Christmas was very good to me this year,” he said with a broad smile.

After the Ligue 1 matches against Saint-Etienne and Brest on Saturday, Pochettino will have an opportunity to win the first trophy of his managerial career next week when PSG duel with Marseille in the Trophée des Champions, France’s equivalent of the Community Shield. However, the 48-year-old is in no doubt his primary mission is to turn PSG into European champions. They will meet Barcelona and Messi in the last 16, with the first leg next month.

“For PSG, as with any big club, the Champions League is the most important competition, though the others are also important. Of course it’s a massive challenge. Next month looks far away but the most important thing is for us to arrive for the match at our best.

“We are really confident. We have an unbelievable squad. This is the moment to try to build, get to know each other and adapt quickly. For sure we are going to arrive at our best and with the aim of winning and going farther.”

Pochettino must cope with a raft of injuries in his first week. Neymar is one of several players unavailable for the trip to Saint-Etienne.

Pochettino’s success at PSG will depend to a large extent on his ability to get the best out of Neymar and Kylian Mbappé, ideally while helping to persuade each of them to sign new contracts, with their current deals expiring next year.

He refused to specify how he intended to deploy each player, saying only he hoped to use every player “in a way that allows them to best express their potential”, adding that “in modern football every team has to be flexible”.

He did, however, confirm that Marquinhos would remain the club’s captain, though he did not say whether he viewed the Brazilian primarily as a defender or a midfielder.