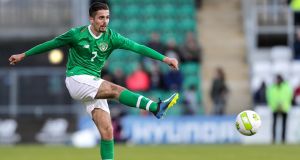 Republic of Ireland Under-21 manager Stephen Kenny declared himself satisfied at his team’s scintillating start to their Toulon Tournament campaign on Monday afternoon in Marseille.

After beating Luxembourg 3-0 in the first game of his tenure in March, Kenny’s cubs maintained their swashbuckling style by dominating an older China side managed by Dutch legend Guus Hiddink.

China briefly threatened a comeback by pulling one back through Yang Li’s 18th-minute header but a pair of second-half penalties from Adam Idah completed another resounding victory.

Up next for Ireland are last year’s runners-up, Mexico, on Thursday night followed by the concluding Group C match against Bahrain on Sunday.

“I was delighted with the overall performance,” admitted Kenny, due to succeed Mick McCarthy in the senior post next year.

“People might associate China with technical style but they’re a strong physical team that are dangerous from set-pieces.

“It was disappointing to concede one from a corner kick but it was a very pleasing display from all the players. I couldn’t fault any of them.”

Brighton and Hove Albion attacker Connolly was the only change to the side so impressive in Kenny’s first game. He was straight into the action, racing to the end-line inside the first minute and his cut-back allowed Elbouzedi to side-foot a first-time shot from 10 yards in off the underside of the crossbar.

Connolly’s volleyed finish had Ireland in cruise control until Li punished slack marking by heading in to make it 2-1.

Liverpool goalkeeper Caoimhin Kelleher’s save with his leg from Huanhuan Shan’s low shot proved pivotal as Ireland went on see out the match. Idah converted spot-kicks on 54 and 82 minutes following handball infringements in the box by China.

1 Gerry Thornley: Wild reactions to this Ireland team as fickle as the wind
2 Man United’s net debt rises by €85.7m to €455.5m in three months
3 Cian Healy out of remainder of Six Nations
4 Joey Carbery undergoes surgery on ankle injury
5 Dan Tuohy explains ‘rotten to the core’ comments
Real news has value SUBSCRIBE
Crossword Get access to over 6,000 interactive crosswords