Can Koeman be the new broom that sweeps Barcelona clean? 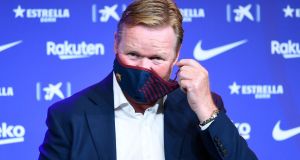 “If nothing goes awry, the new manager will be Ronald Koeman, ” Barcelona’s president, Josep Maria Bartomeu, said, and this time at least nothing did go awry. That was Tuesday night; on Wednesday morning it was confirmed, two days after the sacking of Quique Setién, one day after the departure of Eric Abidal as sporting director. “Welcome home!” cheered the announcement, the club’s website calling him “one of us”.

This was “the return of a Blaugrana legend”, whose first task is to get rid of many others. Men even more successful than him. “It is time to offer an honourable farewell to legendary players,” Bartomeu had said, their illustrious identities revealed by their absence on his list of “untransferables”.

First, though, it is time to welcome one in. A video showed Koeman’s 10 best strikes for Barcelona. There were a lot to choose from, although he never scored a goal more important than the free-kick that gave Barcelona their first European Cup in 1992 and nor did anyone else. Goodwill is guaranteed, for a while at least. “The hero of Wembley,” they call him. That and Tintin.

“We chose Koeman because he knows Barcelona,” Bartomeu said. “We know him well: what he is like, how he thinks and how his teams play. But also for his experience, because he was in Johan Cruyff’s Dream Team, because of his way of understanding football. He knows our philosophy, our way of playing.” Ajax, Barcelona, Cruyff: A, B, C. A classic.

Koeman didn’t come through at Ajax but he did play there under Cruyff, later joining him at Barcelona. A midfielder employed as a central defender at whose feet moves began, he scored 88 times in six seasons, in which they won the European Cup and four consecutive titles. He was close to Pep Guardiola, a kid coming through and already different, became assistant to Louis van Gaal and coached Ajax – the second of nine clubs he has managed, plus the Dutch national team.

Koeman never hid the fact that coaching Barcelona was his ambition, something that didn’t always sit well at Everton. “This is his dream,” Bartomeu said, and it was not an empty platitude. There is a reason he has accepted this job now, at the probable cost of his opportunity to take the Netherlands into the Euros and at a time that is far from propitious, knowing that even if he is a spectacular success he is likely to be gone again in nine months, when elections should sweep aside the men who brought him here.

That close identification with Barcelona and Cruyff opens doors, often enough on its own. It might also mitigate doubts upon arrival. Everton supporters may not be impressed, for example, but what happened elsewhere needn’t necessarily happen here, his place.

He talks of a desire to press high, build from the back and dominate possession, although there’s also a pragmatism and adaptability. “I always admired Cruyff for his thought, for his desire to play attractive football, but I’m a defender: I had to fix things and that has influenced my ideas,” he has said. And yet whether this club is really Cruyffista any more is a legitimate question. Koeman may know “our way of playing”, as Bartomeu put it; it’s less clear that they do.

Besides, coaches don’t always do what they want; they do what they can. That too must change. Barcelona are certainly not the club, the team, they have been – and that is the point.

Over the last few days, a fascinating interview with Koeman from January 2019 has resurfaced. Talking to Ricard Torquemada on Esport3, Koeman warns of the future Barcelona will face. “Suárez is over 30, Messi is over 30, Piqué is over 30, Sergio [Busquets] is over 30,” he says. “They still have a few years left, yes, but then what.

“You have to change because they’re important positions in the team, the entire spine. You’ll have a goalkeeper, but you don’t have a centre-back, a pivot, a centre-forward or Messi. So . . . good luck.”

As it turns out, a few years was optimistic. Replacing that spine is pretty much Koeman’s task right now. There is an economic imperative and a political one, too, an attempt to take power back from the dressing room and mitigate losses of more than €300 million in 2019-20, finally reducing an ever-increasing wage bill. This is not just a question of age and succession. But Barcelona’s plan is to turn to the kids. More to the point, it is to replace the old guard – and immediately.

On Tuesday, Bartomeu was asked which players were not for sale, untransferables. He named Marc-André ter Stegen, Clément Lenglet, Ousmane Dembélé, Nelson Semedo, Frenkie de Jong, Ansu Fati and Antoine Griezmann. He also mentioned Messi, the only over-30. More to the point – and boy, was it pointed – he didn’t mention Piqué, Busquets, Suárez or Jordi Alba. While less significant, nor did he mention Ivan Rakitic, Arturo Vidal or Philippe Coutinho.

The exception, of course, is Messi, of whom in January 2019 Koeman said: “He needs a certain freedom. Others have to work to ensure he can be in his best position.” Bartomeu insisted: “Koeman has told me that Messi is the cornerstone of his plan.” But there is no certainty yet that Messi feels the same way: so far he has kept a discreet if deafening silence and the president admitted that he had spoken only with his father, Jorge.

Messi may take some persuading to lead the kids rather than continue to play with his mates. That, though, is what Barcelona are determined to do. Or so they say. And this is where Koeman comes in. “We’re Dutch,” he told Torquemada. “We don’t fear putting kids in, we’re used to doing that. I always say that when I have one player who’s 30 and another who’s 22 playing at the same level, I will play the 22-year-old because he’s the future.

“You have to put homegrown kids in if they have the ability. I’m always in favour of that because they know how Barcelona play, although if you don’t have that player you have to look outside.”

Over-30s on big salaries are hard to shift, and even harder when you have publicly said you want shot of them

Koeman’s success with a young Netherlands team reinforces the idea that this is a task for him. Then there’s the experience of Valencia in 2008, when he took on dressing-room heavyweights David Albelda, Santi Cañizares and Miguel Ángel Angulo, ostracising them entirely. “His pulse rate won’t change,” is a phrase heard often over the last few days. Another is “iron fist”. In other words, he will have the nerve, strength and personality that Ernesto Valverde and Setién were accused of lacking: he will stand up to the players, not pander to them. He, in short, will force them out.

Except, quite apart from the doubtful logic that it is simply the older players who should be shipped out, it’s not that easy. Not even with Piqué, who said he would step aside if Barcelona needed “new blood”. The accusations levelled at Valverde and Setién, men who lacked backing from the board, were often as opportunistic as they were unrealistic.

Besides, over-30s on big salaries are hard enough to shift anyway, and even harder when you have publicly said you want shot of them. Harder still in a market like this and when those players know that, thanks to elections in March next year, both the manager and the president may be gone soon. Victor Font, currently favourite to be Barcelona’s next president, has already confirmed that no matter how well Koeman does, his coach will be Xavi.

Barcelona tried and failed to push Rakitic out last summer. Busquets’s agent, who also represents Sergi Roberto, has said his clients don’t intend to leave. Alba renewed only recently. And Suárez is in no hurry. If they don’t go, then what? Strength comes from above, but while Barcelona’s president clearly knows how to survive, he’s proven less adept at exercising power.

There’s something a little curious about projecting the Valencia experience as a blueprint, too. Koeman carried the fight on behalf of the president, Juan Soler, more than through conviction and it was a disaster, five deeply unpleasant months. A 19-year-old Juan Mata was always grateful for the opportunity and Valencia won the Copa del Rey, but the ostracism ended in court and players insist that cup success was driven by the dressing room, not the manager. Koeman, isolated and alone, was ignored the night they lifted the trophy and sacked days later, just two points above relegation.

“I hear people talking about Koeman. I wish he could coach Barcelona one day,” Albelda tweeted in 2014. “That way the league would even up a bit.”

That crisis was not of his making, but few lamented his departure. This crisis is not of Koeman’s making either, but it is his to fix, somehow. And fast.