Barcelona ease past Eibar and set their sights on Stamford Bridge 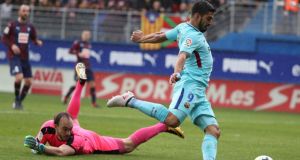 LaLiga leaders Barcelona warmed up for their Champions League clash against Chelsea with a 2-0 win at Eibar, who finished with 10 men and manager Jose Luis Mendilibar sent to the stands.

Luis Suarez put the visitors in front after 16 minutes, latching on to a sweeping pass from Lionel Messi, before Eibar winger Fabian Orellana hit the crossbar.

The Chilean was, though, sent off on 66 minutes for punching the ball away, before Mendilibar — taking charge of his 100th LaLiga game with Eibar — was dismissed for protesting to the fourth official and Jordi Alba added a late second.

Barcelona coach Ernesto Valverde resisted the temptation to rest his key men ahead of next week’s Champions League trip to London.

Philippe Coutinho, though, was named on the bench, the former Liverpool man being ineligible for the European tie in any case.

Goalkeeper Marc-Andre ter Stegen made an early stop from Kike Garcia, who then looked to have been tugged back by Sergio Busquets following a corner, but no penalty was given.

Ter Stegen was called into action again to save a header from Ivan Ramis.

Barcelona had been held to a goalless draw at the Nou Camp by Getafe last weekend, but swept into the lead on 16 minutes.

Messi collected the ball just inside the Eibar half, and looked up before playing a crossfield pass in front of the high defensive backline to pick out Suarez on the right.

The Uruguay forward took a touch on into the penalty area before rounding Eibar goalkeeper Marko Dmitrovic to slot the ball back into the net.

Eibar had lost all seven of their LaLiga meetings with Barcelona, but almost drew level immediately when Orellana’s 25-yard effort hit the top of the crossbar.

Joan Jordan shot wide from 20 yards, before at the other end Paulinho headed straight at Dmitrovic.

Suarez was forced wide on the left by the busy Eibar keeper and pulled the ball back to Messi, but the Argentina forward saw his angled shot strike the post.

Barcelona were soon on the front foot in the second half as Messi created space down the right and pulled the ball back into the path of Suarez, but his chip flew well over.

Orellana, on loan from Valencia, remained Eibar’s dangerman, as his break down the right saw the ball rolled across to the penalty spot where Japan midfielder Takashi Inui stabbed it wide.

The hosts were reduced to 10 men on 66 minutes as Orellana picked up a needless second caution for punching the ball away following a foul.

Eibar manager Mendilibar soon followed as he was sent to the stands for protesting to the fourth official after Suarez was not cautioned for kicking the ball away after an offside flag.

With two minutes left, Alba settled matters, the defender knocking in a rebound after Dmitrovic had saved Messi’s close-range effort.

Earlier on Saturday, Pablo Sarabia was on the scoresheet again as Sevilla downed struggling Las Palmas 2-1 in their final league match before they welcome Manchester United on Wednesday night for their Champions League last 16 clash.

Sarabia struck for the fourth time in Sevilla’s last five league games to double his side’s lead in the Canary Islands after Wissam Ben Yedder had put them ahead. Jonathan Calleri pulled a goal back from the penalty spot eight minutes from time but it was not enough to prevent third-bottom Las Palmas from slumping to a 16th defeat of the campaign.

1 Gerry Thornley: Wild reactions to this Ireland team as fickle as the wind
2 Cheltenham keeping a watching brief on coronavirus
3 Dan Tuohy explains ‘rotten to the core’ comments
4 Questions raised over Ireland v Italy fixture due to coronavirus
5 Cian Healy out of remainder of Six Nations
Real news has value SUBSCRIBE
Crossword Get access to over 6,000 interactive crosswords