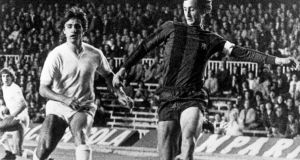 Johan Cruyff in action for Barcelona in 1975. Photograph: PA

On March 24th, 2016, world football lost one of its richest talents.

Johan Cruyff stepped out of Pele’s shadow to assume greatness during the early 1970s and joined the Brazilian superstar among a pantheon which has since admitted Diego Maradona, Zinedine Zidane, Lionel Messi and Cristiano Ronaldo.

A striker blessed with sublime skill — a fact to which Sweden defender Jan Olsson can painfully attest — the Dutchman changed the way football was played at the highest level and inspired new generations to attempt what for most proved impossible, but for him, came instinctively.

Cruyff also took his talent for innovation into coaching, adapting the ‘Total Football’ philosophy of his mentor Rinus Michels and developing it to stunning effect.

Hendrik Johannes Cruijff was born in Amsterdam on April 25th, 1947 and his fledgling talent was spotted early by Ajax, where his mother worked as a cleaner. Having progressed through the youth ranks, he made his senior debut as a 17-year-old in 1965 and marked his emergence from the ranks with a goal to serve warning of what was to follow, although few who witness his first steps in the professional game could have predicted quite how far he would go in the game.

Such was Cruyff’s influence that he was named European Footballer of the Year in 1971, 1973 and 1974, by which point he had joined Catalan giants Barcelona in a then world record transfer.

In his first season at the Nou Camp, Barca ended a 14-year wait for a La Liga title, sending the Dutchman to the 1974 World Cup finals in peak form.

It was in West Germany that summer that Cruyff was to cement his status in football’s highest echelon. The Netherlands did not win the World Cup — they went down 2-1 to the hosts in the final despite the Barcelona star winning them a first-minute penalty — but the man from Amsterdam, who shone throughout, wrote himself indelibly into the consciousness with one breathtaking piece of skill.

A 0-0 draw with Sweden in Dortmund will forever remain in the collective memory after Cruyff, confronted by defender Olsson wide on the Dutch left, feinted one way and then dragged the ball back through his own legs and went the other. The ‘Cruyff turn’ is a staple in the modern game, but its debut left those who witnessed it — including Olsson and his team-mates — open-mouthed.

That said, Cruyff was not a man who endorsed showboating.

He once said: “Someone who has juggled the ball in the air during a game, after which four defenders of the opponent get the time to run back, that’s the player people think is great. I say he has to go to a circus.”

Cruyff unexpectedly retired from international football having scored 33 goals in 48 appearances ahead of the 1978 World Cup finals in Argentina, although it emerged three decades later he had done so after his family had been subjected to a kidnap attempt and he did not want to travel to South America.

He moved to the United States were he had spells with Los Angeles Aztecs and Washington Diplomats, before returning to his native country to win two more league titles with Ajax and one with Feyenoord before heading into retirement.

Success continued to come his way as he took up the coaching reins, leading Ajax to Dutch cup and European Cup Winners’ Cup glory, the latter a feat he repeated after being lured back to Barcelona, where he also won four league titles and, in 1992, the club’s first European Cup with his progressive brand of football.

One of his successors, Pep Guardiola, credited Cruyff with laying the foundations for the Catalan club’s haul of honours since. Guardiola said: “Johan Cruyff painted the chapel and Barcelona coaches since merely restore or improve it.”

Away from the dugout, he launched the Johan Cruyff Foundation, which has adopted projects across the world and used football to improve the lives of poor and disabled children. He also founded the Johan Cruyff Institute for Sports Studies, which provides athletes with a chance to study around their training.

3 — As part of the all-conquering Ajax side, Cruyff won the European Cup for three consecutive years between 1971 and 1973.

8 — The number of Dutch league championship titles won by Cruyff with Ajax over two spells.

33 — The number of goals scored by Cruyff in 48 appearances for the Netherlands before a premature retirement from international football ahead of the 1978 World Cup.

71 — Cruyff won the first of three Ballon d’Or European Footballer of the Year trophies in 1971.

74 — At the height of his playing career, Cruyff captained the Netherlands at the 1974 World Cup finals, where they were eventually defeated by hosts West Germany in the final.

92 — Returning to the Nou Camp as manager, Cruyff guided Barcelona to a first European Cup success in 1992 — just a year after undergoing major heart surgery which prompted him to stop smoking.

922,000 — Cruyff joined Barcelona in a then world record £922,000 deal in 1973, linking up with his former Ajax boss Rinus Michels. In his first season at the Nou Camp, the Dutch forward helped Barcelona end a 14-year league title drought for the Catalans.

1 America at Large: Golfers guilty of legitimising Trump’s toxic regime
2 ‘This is not a personality contest’ - Jack Nicklaus endorses Donald Trump
3 Solskjær’s stock is on the rise again after clever squad rotation
4 Ireland, France or England? Who needs what to win the 2020 Six Nations
5 Sonia O’Sullivan: Nothing normal about days spent under strict hotel quarantine
Real news has value SUBSCRIBE
Crossword Get access to over 6,000 interactive crosswords