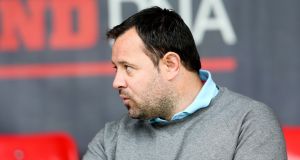 The FAI has named former senior international Andy Reid as the new manager of the Irish Under-18 team.

The Dubliner, now 36, who was a member of the Under-16 team that won the European championship title back in 1998, had been working alongside manager Jim Crawford while working towards his Pro Licence with the FAI.

Crawford, though, has moved to work with Stephen Kenny at Under-21 level and Reid has been handed the opportunity to fill the vacancy left and take charge of the team.

“I have been involved in the set-up over the past 18 months with Jim and have seen first hand some of the amazing work he has done,” says the former Nottingham Forest and Sunderland star. “I am keen to maintain that work whilst putting my own stamp on it. I am very grateful to Jim for all of his help so far and I can’t wait to get started.”

1 Seán O’Brien: Anger over my parents’ break-up never left me
2 Ireland get the job done against Italy to keep alive Six Nations hopes
3 Hugo Keenan and Will Connors: The best of friends, the best of debuts
4 France warm up for Ireland with impressive win over Wales
5 Ireland 50 Italy 17: Ireland player ratings
Real news has value SUBSCRIBE
Crossword Get access to over 6,000 interactive crosswords