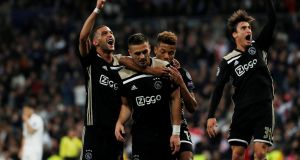 Ajax’s Dusan Tadic celebrates scoring their third goal with David Neres, Hakim Ziyech and Nicolas Tagliafico during the Champions League round of 16 second leg against Real Madrid at the Bernabeu. Photograph: Susana Vera/Reuters

Real Madrid have been European Champions for 1012 days, but their time is up. In 89 days, the final will be held just 14km away but they will not be there. In a single week, they have been knocked out of the Copa del Rey, the league, and the competition they won in four of the last five years. When the end came, it was brutal. It was also brilliant. Ajax came to the Bernabéu and tore them to bits, scoring four goals, each more impressive than the last.

This is the third time Ajax have won here in this competition, after 1973 and 1995. The last two times they won the European Cup; few would expect them to win it this time but on this evidence it may not be so unlikely. Madrid are bad, it is true, their season over in March, but Ajax are very, very good, deservedly through: this victory was as big as the first leg should have been. Somehow, they lost that 2-1. Somehow, that did not matter. In the end, this was comfortable.

Ajax knew that they needed two and the first leg had suggested that they could get them, but even the most optimistic would not have expected to get them so soon. Six minutes had gone when Toni Kroos, that “diesel-powered tractor” as Bernd Schuster had called him, had the ball taken from him and Ajax sprang. Dusan Tadic escaped up the right and pulled it back for Hakim Zayiech to score with a finish as tidy as the move had been. Madrid were passive; Ajax, like in the first leg, were aggressive, the speed and precision was hugely impressive, the ball moved swiftly, spaces opening before them.

Ajax took control, Madrid lost it entirely, the sense that this was slipping away from them shared in the stands and increasing when a superb second goal came. Again, Madrid were caught, slow to react as the move built from the back, and what followed was wonderful. Tadic performed a roulette, turning away from Casemiro and slipped a perfectly weighted pass into the area. David Neres, who a few minutes early had bamboozled Dani Carvajal with a ludicrously brilliant piece of skill, took it round Thibaut Courtois and finished.

The game had not even reached the 20th minute and Ajax had the two they needed. They might have had more as well, another wonderful pass from Tadic sending Neres through only for his clipped shot to go over Courtois and drift wide.

The way that came would soon feel familiar, Frenkie de Jong and Lasse Schöne picking Madrid’s players off. Ajax were dominant, Madrid desperate. The more they accelerated, as if this game was in the final minutes already, the more they lost control. Soon they lost Lucas Vázquez and Vinícius too, both withdrawn injured.

A wonderful ball from Daley Blind released Tadic, whose shot flew back off Courtois’s legs and the Belgian made a sharp save from Ziyech. Madrid were totally overwhelmed, which is not to say that they had no opportunities.

André Onana saved from Vázquez and they twice hit the frame of the goal. Raphaël Varane’s header thudded against the bar in the fourth minute before the tsunami started rolling and Gareth Bale, on for Vázquez, dashed away and lifted his shot against the near post. Vinícius’s injury had come as he struck a shot into the side netting.

If the realisation that they were close to elimination brought a second-half reaction, starting in the stands where a roar replaced the resignation, the feeling did not last long. Asensio and Benzema had efforts but Ajax managed the situation marvellously. The impressive Donny van de Beek was denied by Courtois; Ziyech struck wide; and barely seconds after seeing Benzema step inside him and bend a shot just wide, Noussair Mazraoui was at the other end smashing a shot into the side netting.

He then slid in to stop the ball going out and Ajax ran again, De Beek again involved as they built, the ball worked to Tadic who struck a brilliant shot into the top corner. The Ajax fans roared and then, like everyone else, fell silent. Felix Brych, the referee, had his finger in his ear. The wait for the VAR was a long one, Brych pacing, listening, for five minutes, Madrid’s fate in the balance. Eventually, he pointed to the centre circle: goal!

Marco Asensio pulled one back soon after, but this was done, Schöne scoring a magnificent high, bending free kick from right out on the touchline over Courtois and into the corner of the net. Benzema had one late chance but he slipped. An even worse miss came from Ziyech, but it didn’t matter and Real’s night was compounded when Nacho was sent off near the end. Ajax had enough, Ajax they had four. – Guardian