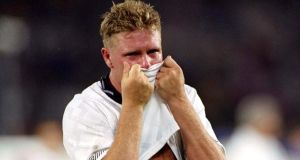 England’s Paul Gascoigne dejected after the semi-final defeat to West Germany at the 1990 World Cup at the Stadio delle Alpi in Turin. Photograph: Inpho/Getty

Some books stay with you forever. Lines from them take up residence in your brain, rather than just passing through in the gush of everything else you read. All Played Out is one of those. Pete Davies’s classic account of Italia ’90 lives on partly because he was embedded with the England squad and they were open and honest with him throughout and partly because of the urgent vitality of his prose.

It’s no exaggeration to say that there has never been a football book like it. And no hostage to fortune to declare that there never will be again. No international manager would ever allow a writer this kind of access nowadays and even if he did, it’s impossible to imagine players being so up front once the tape started rolling.

“I had never met a footballer before. Privately you have these misconceptions and stereotypes. And there was this worry going in that maybe these people are going to be all really thick and dull. Which they absolutely were not. That’s dreadfully unfair to even say out loud.

“But the whole point going was that I wasn’t a journalist. I hadn’t done anything like it before. My whole approach was that of a guy who writes fiction. And my view of everything I ever wrote was that it doesn’t matter what the subject matter is, it’s not worth it if it’s not a thriller. You want people to be turning the page.”

By the late 1980s, Davies had had a couple of novels published to reasonable success in both London and New York. He was turning 30, loved football and was spending a fair amount of time in the US. His Yank friends hadn’t the first clue about the World Cup, of course, even though the tournament was heading to the States in 1994. So he hit on the germ of an idea – maybe he could go to Italia 90 and write a long piece for an American magazine. That was how it started.

“Selfishly, that was my idea. But then my agent started talking to Tom Weldon at Heinemann. And we just had an initially vague set of conversations. And he was really brave. We arrived at the idea of: ‘Never mind the Americans, let’s write a book about this.’

“It was a really brave decision for two reasons. Firstly, I said, let’s base it around England. There are so many issues there with England, not just on the field. What’s gone wrong here? We forget now that football in England in the 80s was awful. Really a bad, bad scene.

“It was brave for him to commission a book to tackle that because there were no good football books. People didn’t publish football books because they assumed that all football fans were sub-human morons who didn’t read books. The vast complexity of so many millions of people who love football was completely not understood and disregarded because front and centre all the time was hooliganism. So for him to say let’s give it a try was bold in the first place.

“The second reason it was brave was because England hadn’t qualified yet. And they very nearly didn’t. It came down to one inch of woodwork – Poland hit the crossbar in the 90th minute of the last qualifier.”

England survived and so did the book. Davies spent the months before the tournament interviewing some of the players and, more crucially, spending time with Bobby Robson. The FA at the time was a distinctly amateurish organisation, which helped him no end. They made no attempt to corral him, other than to say if it was okay with Bobby, it was okay with them.

“I met him for an interview at Lancaster Gate in November of ’89,” Davies says. “It was remarkable. Once we were in private and sat in his office and could get talking, it became apparent what a genuinely decent bloke he was, what a really nice guy and also that he lived and breathed football and loved talking about it.

“I guess he just became confident that he could talk to me safely. There was a key moment in that conversation where he started talking about who he might bring to Italy the following summer. And he said, ‘I could drop Lineker.’ And then he panicked and said, ‘You could sell that to the papers for 50 grand, you know?’ Which was true.

“Dropping Gary Lineker at the back end of ’89 was unthinkable, absolutely unthinkable. So I just said what I explained to people all along which was that my intention was to write a book about the whole thing and that people could feel comfortable and safe about talking to me because it would not show up in the newspaper the next day. That was really the core thing.”

And so Davies became a fixture in the England camp, so much so that by the time the tournament rolled around, most of the players chatted away happily to him about anything and everything. From the pressures of life as pro footballers to their relationship with the tabloid press, which was beyond toxic at the time.

Most fascinating of all, they talked in real time about England’s style of play, about the need for a sweeper and the changes that needed to be made. Chris Waddle and John Barnes are quoted at length about how they’re being wasted in the current system, which they somehow manage to convey without it feeling like they are betraying Robson, a man they both have huge time for. Given that England changed mid-tournament and thrived as a result, it is an astonishing level of insight.

Beyond the in-camp stuff with England, Davies weaves together a heap of other threads too. It’s partly a travel book – Italy is as much a character as Paul Gascoigne is – partly a scathing portrait of the media, partly an eye-witness account of the hooliganism stain that will never quite be washed out of those white jerseys.

All Played Out isn’t a cheery book. Davies wrote it in 58 days when he got home from Italy and though it poured out of him, it is plenty dark in places. Some of it soars because that’s what sport can do but there’s plenty of it that is raw and broken too. The title isn’t an accident.

“There was a grief there,” Davies says now. “I grieve for what has happened to my country. All the shit that is going on in England now has been coming for a long time and you could see the seeds of it in 1990. At the end of the tournament, you could walk away and say, ‘I’ve had a great time, I’ve been so lucky, what a spectacle.’ But the f**kwits were still out there.

“And what was a hooligan element back then has flourished in the decades since to take over Westminster. What is Brexit only political hooliganism? It’s not only the stupidest thing a country ever did, it’s also malevolent and belligerent. It’s kicking in your own windows on a continental scale. I grieve for England. I’m not trying to make myself out to be prescient or prophetic but I felt it then.

“That was what All Played Out meant. You felt it and saw it recurring over and over again. You were feeling good about things and some f**king idiot shows up and ruins it – be it a guy throwing a bottle at the police or one of the tabloids stitching up a player or whatever. What is this culture? Football is a window into a country’s soul.”

Davies went on to write eight more non-fiction books over the rest of the decade before burning himself out and jacking it in to go and go to work for a supermarket. “I ended up knackered. I ended up smashed. I couldn’t write another book. I ended up working for Sainsbury’s for 14 years and I was very, very happy. It was very good for me.”

He came back to writing in recent years and his latest novel Playlist came out a couple of years back. All Played Out became the basis for a documentary called One Night In Turin in 2010 and the book was rereleased, although the title was changed to go along with the film, which seems a shame.

But no matter. Whichever version you pick up, the stuff between the covers is still as visceral and rewarding as it ever was.