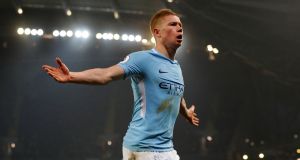 Leaders Manchester City powered to their 16th successive win in the Premier League with a 4-1 thrashing of Tottenham at the Etihad Stadium.

Two goals from the prolific Raheem Sterling added to earlier efforts from Ilkay Gundogan and Kevin De Bruyne as the hosts swept aside the Londoners on a misty night.

Christian Eriksen did score a Spurs consolation, but City could easily have scored several more with Gabriel Jesus — from the penalty spot — and Bernardo Silva both hitting the post and Spurs goalkeeper Hugo Lloris making several good saves.

Perhaps critically, the visitors chose not to adopt the defensive mentality of some of City’s recent opponents and set out to press them.

That made for a frantic start, with neither side wanting to allow their opponents much time on the ball, but City soon worked Spurs out.

De Bruyne began to dictate the tempo and Leroy Sane tormented Kieran Trippier. Sergio Aguero had City’s first serious chance when he headed wide at the near post from a De Bruyne free-kick and the opener followed from another set-piece.

This time it was a corner and Gundogan, replacing David Silva in the side due to personal reasons, reprised the Spaniard’s recent goal-scoring heroics by arriving unmarked to head home.

City were already well on top by this stage and it was remarkable that a second goal did not immediately follow.

Aguero forced a good save from Lloris and Sterling blazed over before Gundogan also shot at the keeper.

Aguero put another shot wide and Spurs were relieved to reach half-time having suffered only limited damage.

Their only opportunities had fallen to Harry Kane, who headed wide and curled a low shot just beyond the post before taking a boot in the face from Nicolas Otamendi in an accidental clash.

City had a lull early in the second half, but Ederson saved well from Kane.

Pep Guardiola rejuvenated his attack by sending on Jesus for Aguero and within moments the Brazilian was denied by Lloris. Sane then forced a fine save from the Frenchman.

Dele Alli was perhaps fortunate to escape being sent off after coming down on the ankle of De Bruyne with a heavy challenge. The England international, who also caught Gundogan in the first half, was shown only a yellow card.

De Bruyne seemed hurt, but the damage was not lasting as he burst into the area moments later and blasted a close-range shot through the grasp of Lloris to double City’s lead.

De Bruyne looked like producing a carbon copy of that goal soon after, but was felled by Jan Vertonghen. Jesus fired the resulting spot-kick against the post and Sterling shot over from the rebound.

Sterling did not dwell on the miss, making it 3-0 after being teed up by Sane at the end of a slick move and then pouncing on a defensive mistake to add the fourth late on.

Eriksen had the final word for Spurs in injury time, but it was a night to forget for the visitors.