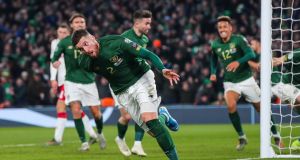 Stephen Kenny believes Tottenham Hotspur have bagged themselves a bargain by signing Matt Doherty for a fee of around €16.5 million.

The Irishman’s transfer was formally announced shortly before Kenny arrived for his first press conference of a week in which he will finally get to oversee the first games of his stint with the senior international side, and he welcomed what he believes will be a very good move for all concerned (including his former club Bohemians, who will get 10 per cent of the fee).

“Yeah, it’s certainly an interesting move for Matt,” he said. “He’s been tremendous servant of Wolves. He’s had a great, great 10 years there, been in League One with them after moving from Bohemians. Mick McCarthy took him initially from Wolves and, you know, he did very well.

“Obviously he’s pushed on over the last number of years and really, his number of assists and goals, a goal scoring fullback, to have a fullback who scores goals is a real asset so it’s great value for Tottenham. I think it’s a great deal for Tottenham.

“I went to see them a couple of times in the new stadium last season and looking at the way they played tactically was interesting. It’s more and more evident that teams are not treating the pitch equally in the way they set up. The balance of the team is set up differently and Tottenham are an example of that.

“More and more sides are setting up with imbalanced teams in search of perfection. I think it’s quite nuanced. And I can see why Matt would be a perfect fit in that scenario although he can adapt to play the conventional back four as well. I don’t see a problem for that. He’s one of the best full backs around for sure. And I would say he would be very much in the frame to play.”

Asked if he might get both Doherty and Ireland captain Seamus Coleman into the same team, Kenny pointed out that there are other options at right back too.

“Yeah, well it’s tough. Right back has been a strong position for Ireland; for me, the strongest out of all the positions because Cyrus Christie has had a really strong end of season at Fulham and we could actually have four right backs in the Premier League next year. There might be Seamus Coleman, Matt Doherty, Cyrus Christie and Dara O’Shea, which is unbelievable really.

“Matt has probably been undervalued by Ireland, only three competitive starts for Ireland at 28 years of age. So I think that’s quite a stark statistic really but at the same time Seamus has been an outstanding player for Ireland for a number of years; a brilliant captain. So it’s a good position to be in.

“But we’ve got so many games, we’ve got eight games in the next three windows, potentially a record amount of games in the calendar and that’s the way where we have to think. So there are lots of games for all the players.”

James McCarthy, meanwhile, will join up with the squad despite the injury sustained while playing for Crystal Palace in midweek and Kenny is hopeful that the midfielder will be fit to feature in Ireland’s games against Bulgaria and Finland on Thursday and Sunday respectively, although the manager admits that he will have to wait and see.

Troy Parrott will have a scan on a muscle injury he picked up playing for Millwall on Saturday and an early decision is likely to be made on fitness. In the meantime, West Brom defender O’Shea has been called into Kenny’s squad for the two Nations League group games, with the 21-year-old Dubliner’s versatility having apparently given him an edge over Kevin Long as the new manager sought to cover a few defensive bases.

“James is travelling in today (Sunday) so we’ll assess him and see how he is,” said Kenny as he awaited the arrival of his players.

“Troy has travelled this morning so he’ll have a scan in the afternoon and we’ll see; he just pulled up with a muscle, so we’ll see how that is.

“We have added Dara O’Shea to the squad. Dara has come through the ranks from the 15s and he’s shown himself very capable of playing in all four defensive positions really with West Brom really. He’s played centre back, right back and a good bit at left back towards the end of the season.

“We’ve got one or two other injuries and strains and so forth so we’ve just given ourselves that additional bit of cover with Dara coming in. With the fact that he has played in all four positions, he’s an asset.”

Kenny had spoken highly of McCarthy when he named his original squad at the start of the week but he insists that with Harry Arter, Conor Hourihane and Jayson Molumby all available, he feels he will still be well covered in central midfield if the 29-year-old ends up being sidelined.

Jeff Hendrick, he suggests, will have a more attacking role although it remains to be seen if the Dubliner, who has just completed a move to Newcastle will be used centrally our out on the right, where he has played a good deal of Premier League football with Burnley.