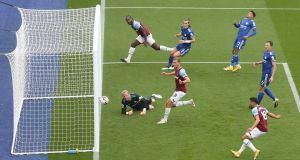 Michail Antonio was on the scoresheet again away from home for West Ham as they brushed aside a lacklustre Leicester 3-0 at the King Power Stadium.

The 30-year-old opened the scoring early on and became the first Hammers player to score in five consecutive top-flight away matches since Mike Small in 1991.

Pablo Fornals doubled the lead before half-time and Jarrod Bowen added some shine to the victory late on after Declan Rice had also struck the crossbar.

Leicester were looking to win their opening four league games for the first time in their history but Brendan Rodgers’ side were never allowed to get going by the visitors, who had Alan Irvine in the dugout once again in the absence of David Moyes.

Ayoze Perez replaced the injured Dennis Praet in the only change for Leicester, while James Maddison was absent from the squad with a calf problem. Recent signings Wesley Fofana and Cengiz Under were included in the squad for the first time and both were on the bench.

Vladimir Coufal was handed a debut for the Hammers following his move from Slavia Prague.

West Ham took the lead after 14 minutes through Antonio. The forward took a quick free-kick after he was fouled by Caglar Soyuncu out wide on the right. He switched play with a cross-field pass to Aaron Cresswell and made a run for the far post, where he was on hand to head home Cresswell’s curling pinpoint cross.

Leicester struggled to break down an organised Hammers defence as their neat build-up play lacked an incisive final pass around the penalty area.

The visitors were having no such problems and Bowen saw his goalbound effort deflect off Soyuncu’s last-ditch sliding challenge and loop onto the roof of the net.

West Ham doubled their lead after 34 minutes. Cresswell’s long, high clearance forward was brilliantly brought under control by Fornals, allowing him to advance into the penalty area and beat Kasper Schmeichel down by his near post.

Leicester had their first real effort of any note at the start of the second half when Harvey Barnes hit a volley wide following a poor clearance by goalkeeper Lukasz Fabianski.

However, the Hammers’ deep defensive line largely continued to deny the hosts space and they remained dangerous on the break through Antonio and Fornals.

That combination would likely have brought a third goal had Jonny Evans not blocked Fornals’ effort inside the six-yard box, following Antonio’s low cross.

Rice came close to making it 3-0 midway through the second half. The midfielder made a surging run towards goal, holding off Nampalys Mendy for much of the way, after receiving the ball inside his own half and hit a shot inside the penalty area which struck the underside of the crossbar.

The seemingly inevitable third goal did arrive seven minutes from time. Fornals’ pass in behind the defence cut Leicester open again and Bowen darted through to finish neatly past Schmeichel and ensure another emphatic Premier League victory for West Ham, following their 4-0 success against Wolves last weekend.

Leicester’s day was summed up in stoppage time when Jamie Vardy, largely anonymous for the entire match, finally got some decent service but clipped his finish over the goalkeeper and wide after Kelechi Iheanacho’s lovely through ball had put him through one-on-one.

Barnes then had a goal ruled out by VAR for a marginal offside at the death.

Southampton secured their second Premier League win of the season with a hard-fought 2-0 victory over West Brom at St Mary’s.

West Brom goalkeeper Sam Johnstone had made three diving saves before Moussa Djenepo put Southampton ahead on the brink of half-time in difficult conditions.

Oriol Romeu then volleyed the ball into the back of the net in the second half to double the home side’s advantage and seal all three points for Saints.

Southampton manager Ralph Hasenhuttl had said before the game he wanted his side to concentrate and be clinical for the full 90 minutes and they delivered, despite Johnstone’s efforts between the posts.

West Brom had put their first point on the board since promotion last weekend after a 3-3 draw against Chelsea — a match in which they led 3-0 at half-time — but they struggled to create chances and challenge home keeper Alex McCarthy.

Ryan Bertrand forced Johnstone into a save inside the first four minutes. The ball was played across to the former Chelsea man, who found himself unmarked on the left side of the box, and the goalkeeper came off his line to make the save.

Southampton came close for a second time in the 15th minute, only to be denied again by Johnstone who made a double save, first from a deflection off a West Brom defender and then with an outstretched leg to divert Che Adams’ follow-up strike over the bar.

The home side were on top in the early stages but often struggled to turn their prolonged periods of possession into clear-cut chances, with the Baggies defence quick to turn away balls into the box.

Johnstone was called into action again inside the opening half an hour, with a diving one-handed stop to turn Danny Ings’ goal-bound header behind for a corner.

Just before the stroke of half-time, however, Southampton made the breakthrough.

Ings’ shot was blocked but the ball fell to Djenepo, who misled the defenders before firing past Johnstone and into the bottom corner.

West Brom had a penalty shout at the start of the second half when the ball appeared to hit Bertrand as it went across the box, but the match continued without a VAR review.

Just as West Brom looked to be gaining a foothold in the game, Southampton doubled their lead, with the ball looping to Romeu who sent a powerful volley past the goalkeeper for his first Saints goal since February 2019.

Pedro Neto struck to lift Wolves and condemn Fulham to another defeat.

The forward’s goal earned the hosts a 1-0 win as Nuno Espirito Santo’s side rediscovered their form.

Alphonse Areola’s double save denied Neto and Nelson Semedo, while Aboubakar Kamara missed a glorious chance to level for the visitors.

It meant Fulham slipped to a fourth straight loss to remain bottom of the Premier League.

Despite a tireless display, it has been a chastening return to the top flight for Scott Parker’s side, who have conceded 11 goals — the most they have shipped in the opening four league games since 1960.

Wolves, smarting from their recent loss of form, were tentative but still had too much for Fulham to end a run of three straight defeats.

They started slowly, though, and Antonee Robinson tested Rui Patricio after a strong run.

The Cottagers were sharper than their hosts in the opening 20 minutes, but Wolves slowly began to take control.

Yet, lacking confidence after their run of losses, including a 1-0 Carabao Cup exit to Stoke, the hosts’ usual zip was missing.

It did not help that Nuno opted for the conservative pick of Romain Saiss out of position at left-wing back, with Ruben Vinagre close to a move to Olympiacos and a deal for Angers left-back Rayan Ait-Nouri not yet complete.

They needed Tim Ream to gift them a chance after 27 minutes, only to be denied by Areola’s brilliance.

Neto intercepted the defender’s sloppy pass and his low strike was parried by Areola, who was up quickly to deny Semedo from close range.

It was a rare chance in a combative but forgettable half and Wolves have now failed to score in the first half in 19 of their last 25 top-flight games.

Max Kilman’s hopeful long ball sent Raul Jimenez through and he was thwarted by Areola’s legs, with the goalkeeper claiming Leander Dendoncker’s follow-up.

The reprieve did not last long as Areola was finally beaten a minute later when Neto grabbed his first goal of the season.

Dendoncker’s shot was blocked by Robinson and, as Fulham failed to clear, the ball ricocheted to Neto, who drilled into the bottom corner from 16 yards.

It was a reward for an energetic opening to the half, but the Cottagers should have levelled after Ademola Lookman brilliantly worked the ball to Aleksandar Mitrovic.

The striker unselfishly squared to Kamara, unmarked eight yards out, but he could only tamely sidefoot straight at Patricio.

It summed up Fulham’s afternoon and Neeskens Kebano drilled over with a minute left as the Cottagers faced up to another defeat.