Özil omission from Frankfurt trip not due to hostility, says Emery 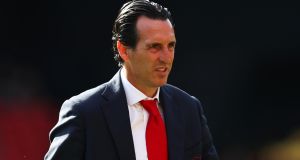 Arsenal manager Unai Emery: ‘We are playing a lot of matches and I want to use different players.’ Photograph: Julian Finney/Getty Images

Mesut Özil has been spared a potentially stormy return to Germany after Unai Emery opted to rest him for Arsenal’s opening Europa League tie at Eintracht Frankfurt, saying he is keeping the playmaker fresh for the match against Aston Villa on Sunday.

Emery was at pains to say that Özil, who played his first 71 minutes of the season in the 2-2 draw with Watford, has been left in London – along with the centre-back Sokratis Papastathopolous, who by contrast has completed all five of Arsenal’s league games – to manage his workload.

“We are playing a lot of matches and I want to use different players, and also have some rotation in the first 11 and in the 19 players in the squad for [Frankfurt],” Emery said.

“We are going to play another match on Sunday. My decision is because he played, and I decided who the players are who can be the best for tomorrow, and also the players not, and those are Sokratis and Mesut.”

When asked if his decision was designed to ensure Özil did not endure a hostile reception at Commerzbank-Arena, Emery flatly replied: “No.”

Regardless of the reasoning, Özil’s non-selection removes a problem from an already tricky assignment. The playmaker retired from international football in July last year after citing “racism and disrespect” in connection with his Turkish roots and support for the country’s regime, saying he felt “unwanted”. When Germany faced Saudi Arabia before the 2018 World Cup, Özil was an unused substitute but he and Ilkay Gundogan were booed by supporters in Leverkusen. He remains a divisive figure in Germany and has not played there since.

Of course I’m happy to be back. Of course mentally this was hard, also missing training for a couple of days

Özil’s start to the season was delayed amid concerns over his safety, along with that of the left-back Sead Kolasinac. The pair were attacked in north London in July and Kolasinac said he has put the incident behind him. “I don’t want to talk about it in detail. It’s happened and it’s something that belongs to the past. The same with Mesut. We are back and we focus on our job and the team.

“Of course I’m happy to be back. Of course mentally this was hard, also missing training for a couple of days. I made up for it.”

Emery will pick a strong side for what should be the toughest game of Arsenal’s group stage even if Eintracht, semi-finalists last season, have lost strikers Luka Jovic, Sébastien Haller and Ante Rebic. “It will be a really good match between two sides who want to do something important in this competition,” he said.

Granit Xhaka will continue to captain Arsenal if selected, but a final decision on the armband’s longer-term wearer, which Emery had expected to make this week, has been postponed. Emery said he preferred to spend recent days speaking with his players about their collapse at Vicarage Road and preparing to face Eintracht. – Guardian